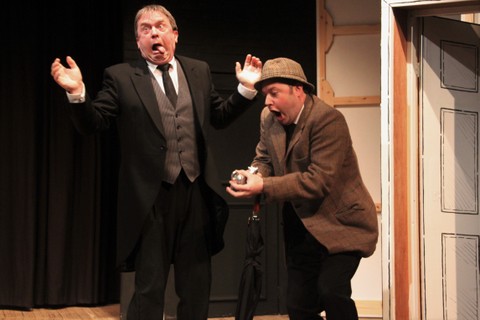 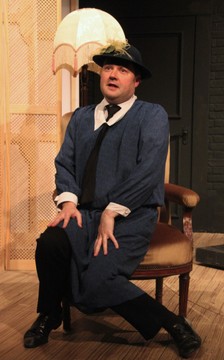 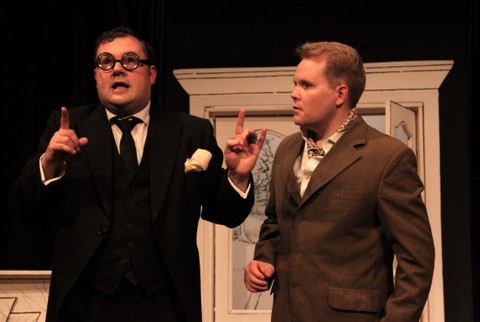 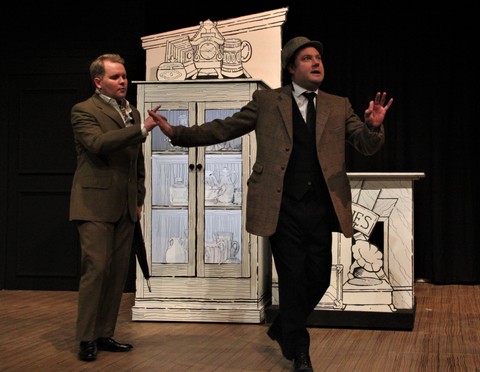 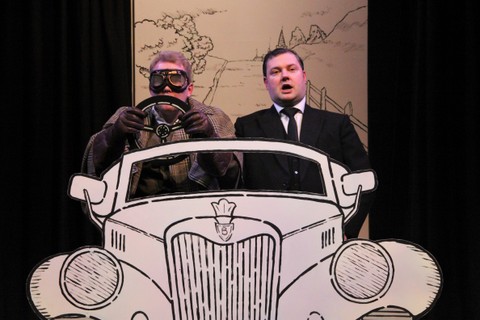 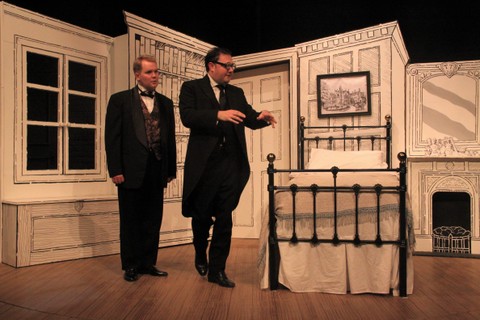 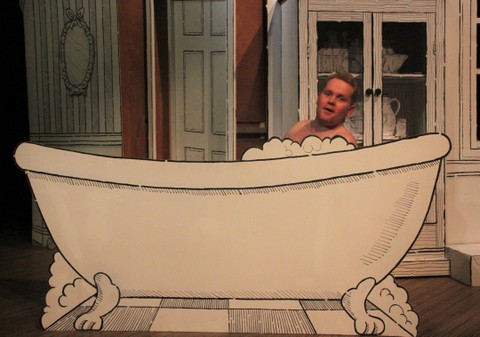 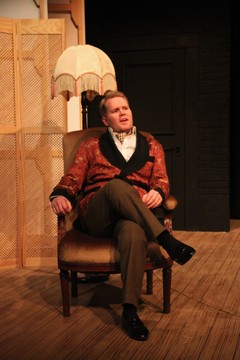 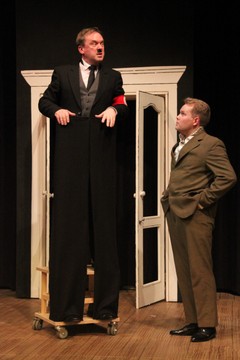 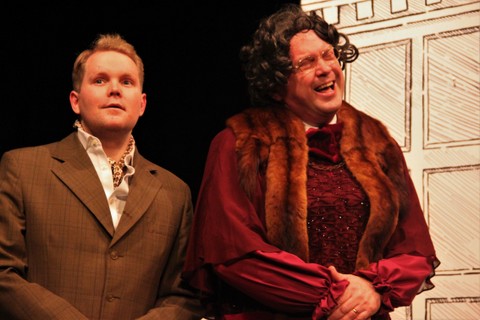 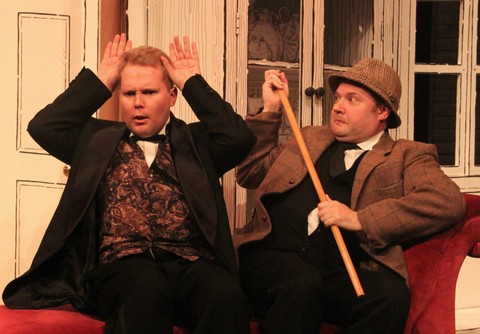 What a cracking show with which to kick off 2020. Beautifully crafted, very funny and a major achievement for the three actors. Peter Calver as Jeeves and Chris Hannigan as Seppings, both of whom turned themselves on a sixpence to become the other characters in the tale, and Jamie Heath as Bertie Wooster - never off the stage. The comedy was constant and the whole production slick.

The fourth achiever in this trio is the director David Sanders who denigrates himself in his programme notes - passing the success of the show to both the cast and the Miller Centre production team. Excellent as they always are, anyone who has directed a show knows that it requires intense involvement and a good knowledge of  stagecraft. Here there was both and the resulting production was a sheer delight.

Jamie Heath’s faultless delivery of a huge amount of the script, in exactly the right ‘Wooster’ tones, presented a Bertie so recognisable from the P.G.Wodehouse tales. Bertie is good at heart, disliking both the company and behavioural prescription of ‘aunts’, ever trying to dodge the matrimonial plans others may have for him and always dependant on Jeeves to bail him out of tricky situations. To represent such a well-known and much loved character on stage is a demanding call but this was achieved right from the first ‘what ho’.

The premise of the play, written by The Goodale Brothers and using many of the characters from the P.G. Wodehouse books, is that Bertie has decided he could become an actor and has a good story to tell.

Jeeves plays himself, within the tale, but Peter Calver is called upon to transform himself into many other folk in order to ‘people’ the stoy. His cut-glass accent reigned supreme as Jeeves but had to be dropped, instantly, when becoming a new character. Costume changes helped - and these were often wonderfully speedy, yet he, like Chris Hannigan as Seppings (purported to be Aunt Dahlia’s butler) never faltered in remembering who he was supposed to be.

Chris Hannigan made an impact on the tale right from the first moment he stepped on stage simply with body movement and facial expressions. Called upon to transform from the haughty, upright and loud Aunt Dahlia to an elderly antique shop proprietor, the even more elderly butler Butterfield at Totleigh Towers and an officious police constable, he also had to manoeuvre a contraption on castors around the stage in order to make himself appear taller when playing the officious Roderick Spode.

Inevitably, there comes a moment in the play when two of the characters who are played by the same person (Jeeves) - Sir Watkyn Bassett and Miss Stiffy Byng - are scripted to be on stage at the same time. This was cleverly achieved through the ingenuity of Berry Butler as Wardrobe Mistress by creating a split personality costume. Peter Calver, playing both roles, was dressed in tweeds down one side, complete with hat, and a pale, full-skirted coat and hat on the other side. He turned the correctly-costumed side to face the audience to deliver the lines, depending on who was speaking.

Complementing the frenetic energy of the cast, who were in and out of costumes like greased lightning, was Keith Orton’s stylistic set, consisting of individual mobile
backdrops drawn, as if by an artist, in black and white. The curtains opened to an almost bare stage with just a chair and a standard lamp, and slowly built up to whole room sets with the helpful aide of the revolve. Both designer and the team of five set painters created a most unusual and very effective set.

Delivering a considerable amount of farce, albeit without the usually requisite number of doors decreed, there were delightful ‘cut out’ pieces of scenery like Bertie’s bath for wallowing and the realistic car which took Bertie and Jeeves to Totleigh Towers to continue telling the tale. With an experienced and dedicated cast, a script full of comedy and a director with an eye to detail, it was no wonder that the audience spent the whole evening laughing in their sold-out seats.