Stepping Out is a warm and very funny play about the lives of a group of women (and one man) attending a weekly tap-dance class in a dingy North London church hall. Led by Mavis, their eternally patient instructor, and accompanied by the acerbic pianist Mrs. Fraser, the students (who range from hopeless to competent) strive to master the basics of dance, but the steps and routines are just the background for the real focus of the play - the relationships and interactions of these ten very different people. By their final performance, not only have the class members been transformed into triumphant tappers but they have also overcome the inhibitions, awkwardness and personality conflicts that have kept them out of sync.

"Constantly simmers with laughter . . . . a bright, sparkling show which reaches all the high kicks." London Broadcasting 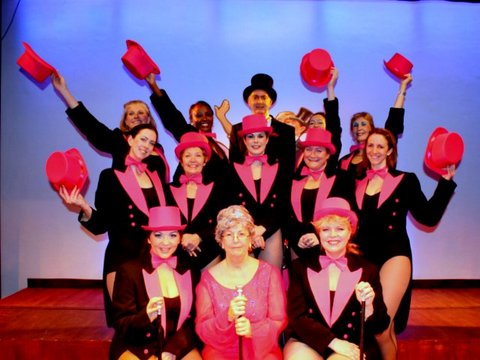 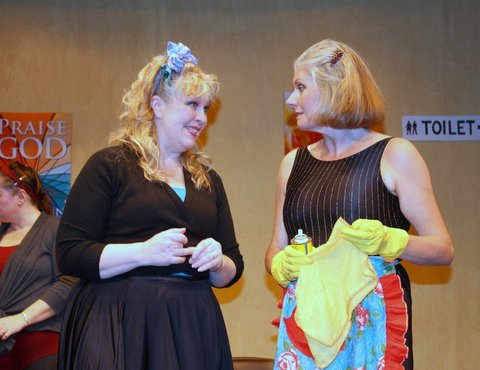 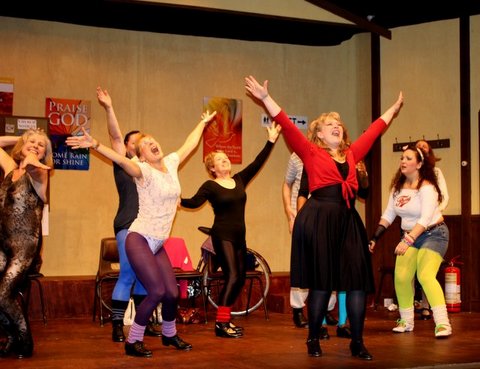 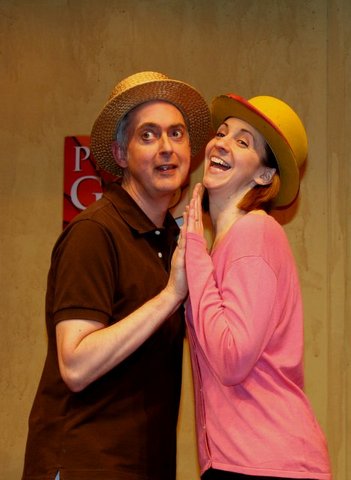 The diverse characters which make up Mavis's tap class are all so well drawn by playwright Richard Harris and require actors with not only considerable acting skills but an ability to learn tap too. It says much about this production that skilled dancers were able to show unskilled footwork but shone in the final number, and learners looked equally good at the end too.

Hazel Istead excelled as the less than sylph-like Sylvia; the butt of her own ridicule, braving revealing dance outfits, gabby about her private life and rolling out many of the piece's comedy lines. At the other extreme is Andy - reserved and gawky, Tamsin Reeve brought out all her insecurities but showed determination in the tap class as being 'the one thing I do, for me'.  Berry Butler conjured up a reserved Dorothy, always arriving by bicycle, dedicated to her job in Social Security and willing to practice the steps, and help others, at every opportunity. Vera is a latecomer to the class and able to put everyone's backs up almost immediately with her tactless observations and cleaning phobia. Sue Rider caught her just right - overstating Vera's happy family life before it is revealed as anything but.

It was good to see Debbie Skipper back on stage again playing shop owner Maxine - able to get clothes and dancewear for the class but not always getting it either on time, or right. Hannah Moore as Rose is, as the script delivers, 'the token Spade', with good delivery of more comedy as well as some of the show's gentle racist comments. Lynne is the class peace-maker and also able to take the class if required. SarahJane Cooper gave her empathy and understanding and, again, a willingness to help others shaky on the routine. The only male in the class is the reticent Geoffrey (David Green) who rides the innuendo sent his way by the girls whilst struggling with both the tap steps and his feelings.

Cat Longhurst as the teacher Mavis brought out the character's patience for her pupils and her love of dance whilst trying to subdue her own considerable problems. One such problem was dealing with her taciturn pianist, Mrs Fraser, who took offence and went off in a huff very easily. Vicky Watkins aged up to make her both comic and disruptive, with her own comedy turn in the limelight as the 'filler' whilst the class changed into the splendid finale outfits created by Sue Kennard as wardrobe mistress.

Natasha Farrant choreographed the show, with Sue Reader as Dance Captain. The 'church hall' set transformed speedily into the venue for Mavis' 'Tappers' to do their routine, which was awarded deserved applause. Under the excellent direction of Morven Rae, the production showed yet more diversification of this theatre company, and sent the audience away with a happy smile on a drizzly November night.