Far From The Madding Crowd

Thomas Hardy's much loved classic, Far From the Madding Crowd, is brought to life in this new production which fuses vivid story-telling, live folk-song and humour in a dynamic ensemble setting. Bathsheba Everdene finds herself playing mistress in a man's world. She is pursued by three very different would-be lovers: Gabriel Oak, William Boldwood and Sergeant Troy. But are any of them a match for the wilful Bathsheba? A gripping tale of love, tragedy and betrayal.

This production will also be taken to the world famous Minack Theatre in Cornwall from Monday July 21st to Friday July 25th 2014. Join us there if you can! 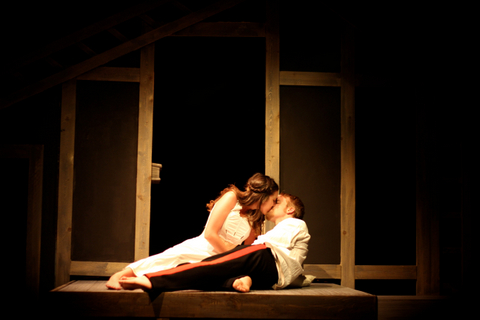 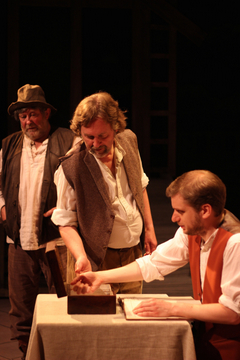 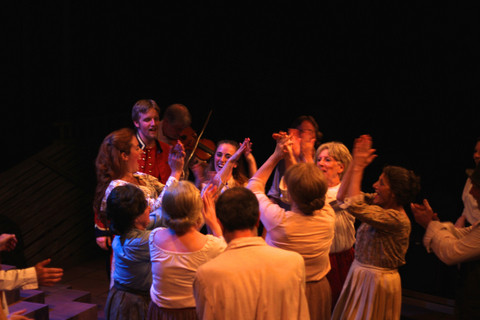 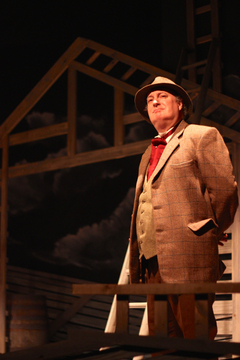 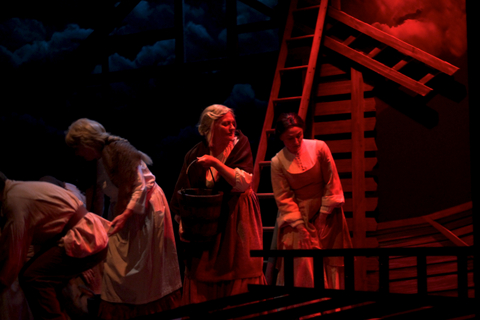 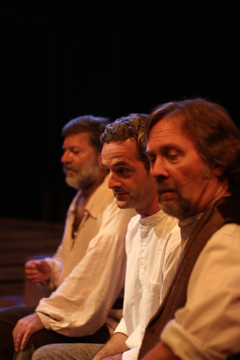 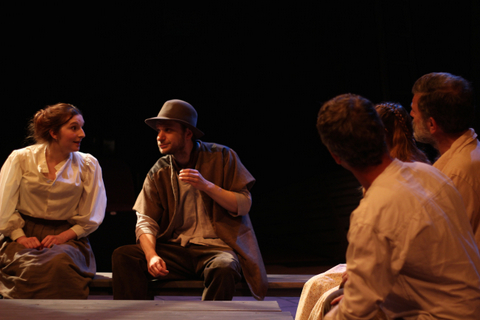 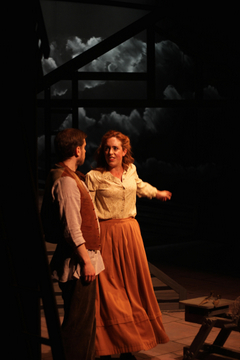 Adapted from Thomas Hardy’s classic by Mark Healy, the play contains all the story’s original elements but appears to elongate the early chapters, thus necessitating the many events in the latter part of the tale to be presented with undue haste. The principles and the equally important smaller roles, however, really brought the book to life under the diligent eye of director Jacquelyn Wynter.

Scenes and locations change rapidly within the play and Keith Orton designed a set created to assist the uninterrupted flow from one to another, assisted by an important lighting design by Maddy and Martin Swain. Props were, interestingly, both real and imagined (as in the scything of the crops) and there was a curious element of some celebratory drinkers having actual  vessels and some using imaginary ones although this could well be a reflection on setting and striking creating a possible delay to the action.

Farmer Gabriel Oak wins hearts and minds from the outset for his honest character and Robin Clark underlined Oak’s straightforward approach to life as a mainstay of the production. Lucy Baker, as the object of Oak’s unfailing affection, Bathsheba Everdene, excellently grew her character from the flighty girl to the business woman, running her own farm whilst wrestling with difficult matters of the heart.

Both Bathsheba’s girl employees made an impact on the production - Gail Bishop as the limping MaryAnn Money and Pamela Cuthill as the supportive and slightly cheeky Liddy Smallbury. Amongst the farmhands Brian Miller stood out as Joseph Poorgrass, adding appropriate accented mumblings to fill scenery-moving moments and generally endorsing the West Country flavour of the piece. Adam Cobby (also the Lawyer Banks) Nigel Swift and Jonathan Hill (who also almost officiated at the aborted wedding) added to the reality of farm workers.

To Cris Semple as the heartless Sergeant Troy fell the job of enticing Fanny Robin to his bed and later, wooing Bathsheba - believably portraying the mercurial emotions required in the role. Steve Boxall showed the stability and unexpectedly deep love for Bathsheba as the solid Farmer Boldwood and Helen Chisnall added to the cast playing double or triple roles as Mrs Hurst.  Hannah Millsted strongly delivered the joy and then sadness as the fated Fanny Robin and Iain Brock gave much to the production as the live fiddle player.

Add to this large and talented cast a chorus in many guises and the Miller Centre Theatre Company have a splendid and emotional production with which to wow their audience in the enviable setting of the Minack Theatre in Cornwall from the July 21-25, upon which, it is hoped,  both the sun and the moon, will kindly shine.