Never mind the title, this is a very funny comedy, written by the man who gave us Rising Damp and other enduring sitcoms. This one concerns the funeral of television comedian and national treasure Dave Thursby. His open coffin is on display in the drawing room of his lovely home and gathered around are his widow and his agent, his writer and their wives - plus Dave's former wife who arrives unexpectedly. As the drinks flow and the day unfolds, grief turns to outrage as the truth about this revered celebrity begins to emerge. 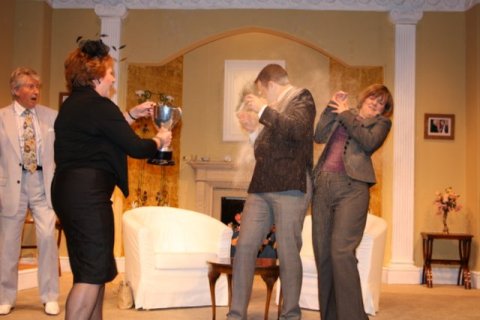 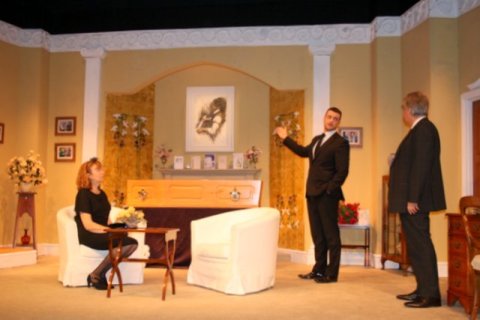 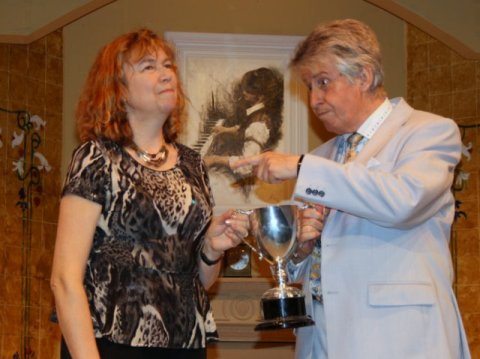 The curtain rising to a scene of an open coffin in the sumptuous sitting room of Laura Thursby, in which her husband Dave lies, awaiting his funeral, is hardly likely to be a comic scene, but in Eric Chappell's play, the laughter starts there and simply continues.

Dave, a renowned comedian and national treasure is claimed as a best friend of long standing by Harvey Barrett, given the perfect touch of sincerity, comedy and excellent timing by Reg Anderson. Harvey's wife Vi is more pragmatic with her own secret knowledge of what Dave is really like and Anne Gregory truly brought out Vi's practicalities and realism without giving the game away.

Add to this an unexpected mourner - Kay, with yet another secret to astound, with Linda Harris keeping Kay's powder dry until succinct revealing moments. Dave's agent Kevin is little short of neurotic and even more so when revelations expose Dave's amusing high jinks in the stationery cupboard with Kevin's  wife Jane. As Kevin and Jane, Paul Farrell and Suzie Farrell utilise the playwright's witty dialogue - he constantly sparring with both his wife and the other close friends and she trying desperately to underplay whatever did actually go on in such close confines.

The widow, Laura, is remarkably gung ho about the proceedings although Margaret Hey in the role markedly changed her tune on discovering she may not be such a merry widow after all.

Jenny Kingman's set design is one of the very best I have seen at the Miller - I couldn't wait to move in to its elegance and attention to detail.

Director Peter Whittle has a feel for this slightly ghoulish humour and brought his cast to their peak in comedy, reactions and such a fast pick-up on cues that the realism of the conversations were impressive.