In this classic black comedy, a recent hit in the West End, five criminals posing as musicians take up lodgings in the lopsided old house of Mrs Wilberforce to plan a heist. Led by Professor Marcus, everything goes according to plan, right up until Mrs Wilberforce discovers the money and threatens to call the police. There's one obvious solution... but none of the crooks want to be the one to bump her off. As the night progresses, a dangerous game begins as the men try to escape with the money – and their lives. Who would think one sweet little old lady could cause so much trouble?

'A joy from start to finish.' Daily Express

'The show works and, at its considerable best, works triumphantly.' The Daily Telegraph 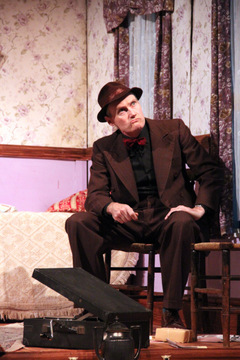 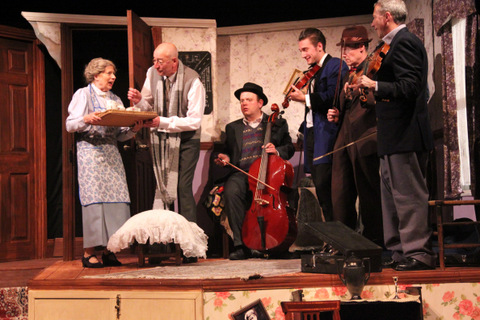 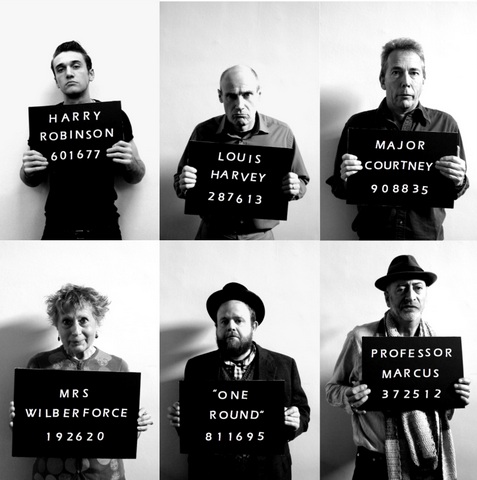 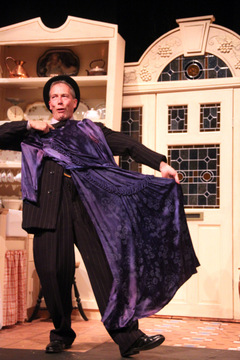 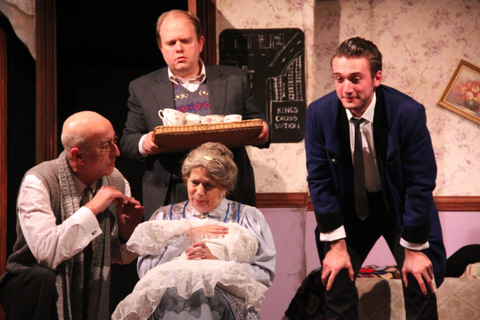 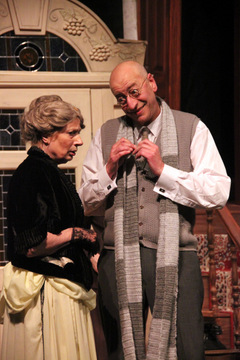 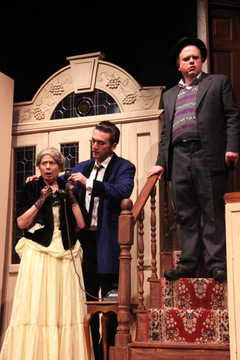 Because this great comedy demands such a complicated set it's a daunting production for amateurs to even consider but Mike Millsted took on the challenge - and won!. Keith Orton's superb set design brought not only a front door, kitchen, sitting room, stairs, bathroom door and a bedroom onto the stage but, with canny use of the revolve, the front of the house (including the important subsidence) and the mouth of a large railway tunnel as well.

With his truly excellent cast and his own experienced direction, Mike Millsted gave the sell-out audiences a wonderfully comic evening which was joyfully applauded.

Lawrence Marsh as Professor Marcus, wearing a scarf so long that it had a life of its own, led his 'band' of thieves, being in turns polite, quick thinking, ingenious and commanding, depending on whom he was addressing. Ian Brown, as an undercover confidence trickster, took to his false identity as Major Courtney, bumping up the comedy and dancing delightfully with the dress he coveted. Ryan Doherty, the youngest of the crooks, was charmingly laid back in all except his dislike of small stains or marks on things - an obsession which cost the gang dear. Michael Hall as One-Round did total justice to playwright Graham Linehan's comic script and Russell Gregory's sinister Louis added a knife-wielding thug to the group.

Nikki Packham's genteel Mrs Wilberforce threaded through the play dispensing cups of tea, a total belief that her lodger, the persuasive Professor, and his friends were an orchestral string quartet and having concerned conversations with her ailing caged parrot, General Gordon, so realistically voiced by Pamela Cuthill. Paul Valleau opened and closed the play as Constable MacDonald, who deemed Mrs Wilberforce's criminal tales to be oh so fanciful.

Memorable moments are many. Amongst them, the arrangement of the gang's faces, shown beaming, as the large cupboard in which they are hiding is opened; the surprise of the fast scene change to the outside of the house as Major Courtney tries to escape with a coat stuffed full of the stolen bank notes; the destruction of the banisters caused by a well-choreographed fight; the sound of the train approaching and receding, often heard due to the house being right next to Kings Cross station and the emotive 3rd movement of Boccherini's Minuet, played in the bedroom on a gramophone, to cover the gangs planning meetings but which Mrs Wilberforce requests them to play as a small concert for her friends. The cacophony of the 'piece' they do play adds another memorable moment!

With Dawn Lambert in the small cameo role of Mrs Tromleyton, together with a group of astounded friends attending the concert, the expertise of Vernon Culver's sound and Niall Monaghan's lighting; Mike Bell assisting with set design; Denise Scales sourcing the costumes and a bevy of company members doing the set construction and painting, the show's success had many contributors.

The courage to put it on, the hard work by all concerned and the delightful result will remain a real triumph for the Theatre Company.