A businessman staying in a London hotel hires a call girl to perform certain tasks for him. Got the picture? Except you won’t because this is one of Ayckbourn’s most ingenious comedies and it turns out that all the man wants is the girl to sign as witness to his statement incriminating his partner in the murder of his wives. That is only the start of the surprises for when the girl opens a door in the room, she finds herself in the same room – but twenty years earlier. What’s more, the room is now occupied by one of the allegedly murdered wives who is intent on re-writing the future. Confused? You won’t be, for this is a wonderfully inventive journey through time via Alan Ayckbourn’s imagination. 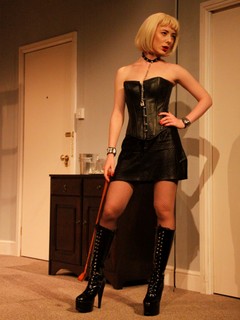 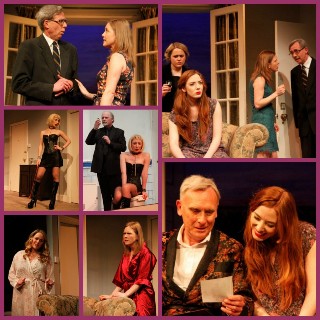 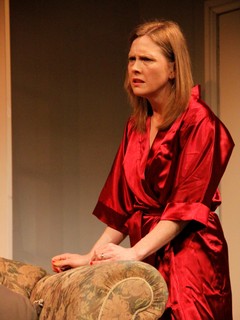 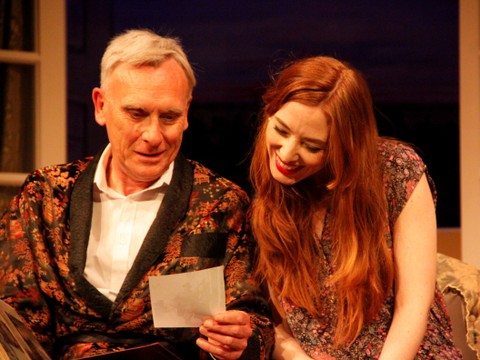 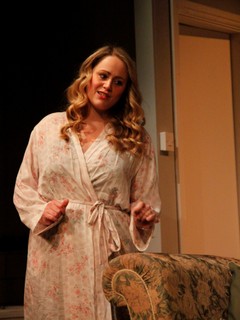 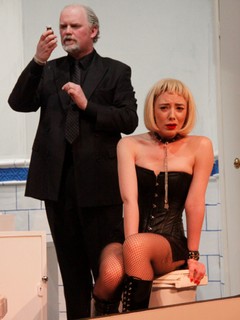 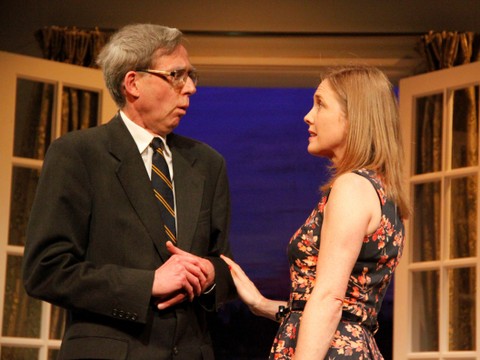 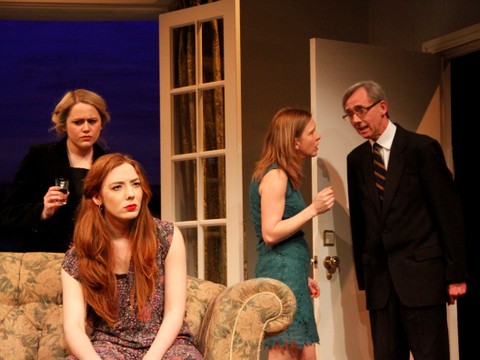 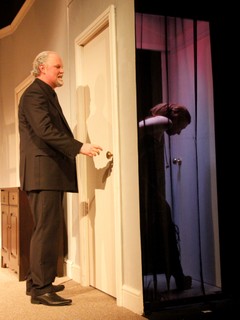 The need for a set construction which actually creates communicating doors, rather than just the illusion of them is something that prohibits many amateur groups from presenting this quite complicated Alan Ayckbourn play, but set designer Tony Dent had it cracked at the Miller Centre. With the use of a small revolve and some Dr Who/Disco-type lighting, it was easy to believe that those passing through the doors emerged into specific previous years.

The venue is a constant – the same hotel room in the Regal Hotel, London, but the times differ between 1997, 2017 and 2037 and the tale encompasses three ladies who aim, abetted by time travel, to thwart the husband of two of them, helped by a visiting Miss Whiplash, hired in but getting unavoidably involved.

In the year 2037, Emma Bugg made an entrance, full of impact, with Streatham speech in skimpy leather and a blond bob as Poopay, hired, it transpired not to discipline her client but to help him smuggle out his written confession, now he is terminally ill. A totally convincing performance here, keeping that harsh accent up right to the dénouement when the final twist to the plot is delivered and her ‘Saff London’ speech turns more South Wimbledon.

Peter Damesick is the dying husband Reece who has collaborated with his controlling and evil business partner Julian, in the murder of his two wives – for financial gain of course. Second wife Ruella gets to see the confession, carried by Poopay as she inadvertently flees from Julian through what she thought was a cupboard leading nowhere. In fact it takes her to meet Ruella in 2017.

Julie Anderson created the practical, sensible Ruella, working hard at how to save herself from being tipped off the balcony. Anderson’s movements, energy and quick delivery all smacked of a lady determined to live. She, in her turn, through the cupboard, returns to first wife Jessica.

It is 1997 and Jessica’s wedding night. Trying to convince her of her pending doom takes clever thinking, as Chantelle Davison creates a bride unable to absorb the prediction that she will be drowned, choosing to dismiss the whole tale – until, that is, she reads the confession and later uses the communicating door for her own purposes.

Julian is the murdering monster in the play and Rob Preston brought out many evil nuances and physical actions to endorse his character, even including the way he walked, showing malicious intent.

A comic note is injected into the proceedings by the obsequious over-helpful Hotel Manager, whom David Fanthorpe made ingratiating combined with incredibility but who, when the chips were down, came to the aid of Ruella and Poopay.

Act One ends on a real ‘gasp’ moment and is followed by a good few more ‘oh no’s’ but I did feel the playwright let the script down a little with the chaotic balcony scene where Ruella may be tipped over. Some not very convincing dialogue and too much happening at once, making it look just a tad silly.

That said, it was the only moment which didn’t appeal and director Russ Gregory and his cast are to be congratulated for creating real suspension and the Theatre Company as a whole get applause for attempting such a tricky play – and pulling it off.