This wonderfully entertaining comedy is a romp through the familiar story of Nell Gwynn, the orange seller who became an actress and then the long-time mistress of King Charles II. Nell Gwynn is the leading character – a bawdy, witty, charming, sexy creature who gives as good as she takes from anyone and everyone. Surrounding her are a long list of actors, writers, tarts, theatre managers, stage hands, society ladies and gentlemen – and, of course, the king himself. Altogether, a glorious picture of late 17th century London life – both low and high – plus a bit of music and dance. Altogether, a delight which we shall be taking to MInack in July 2017. 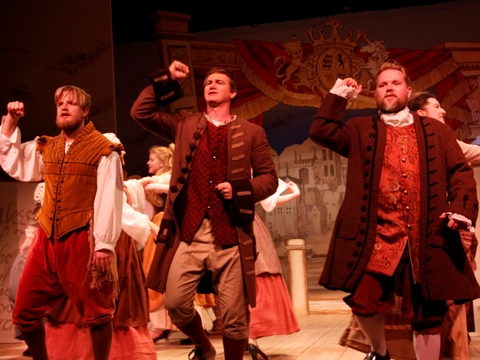 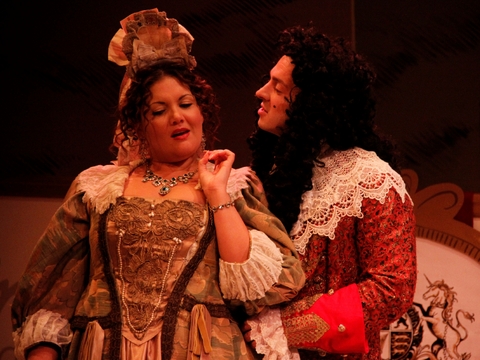 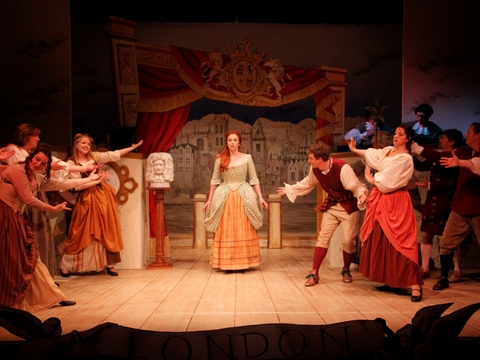 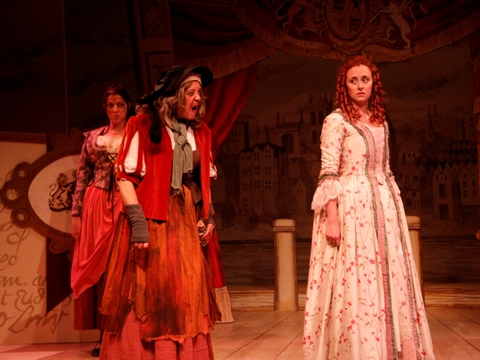 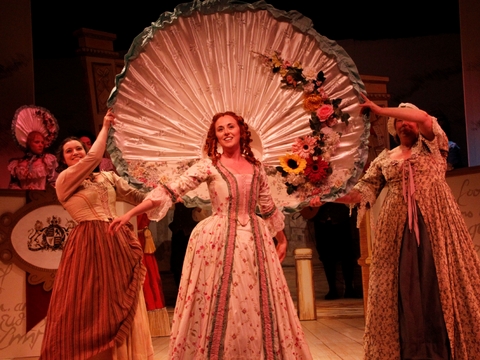 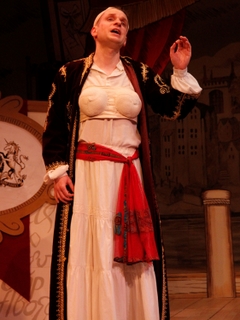 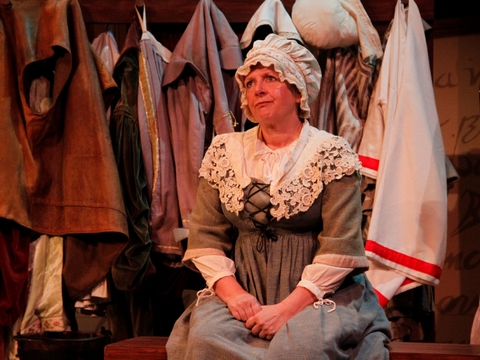 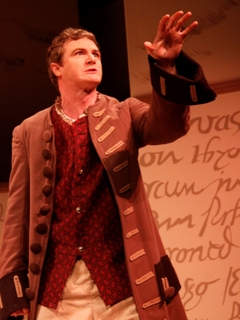 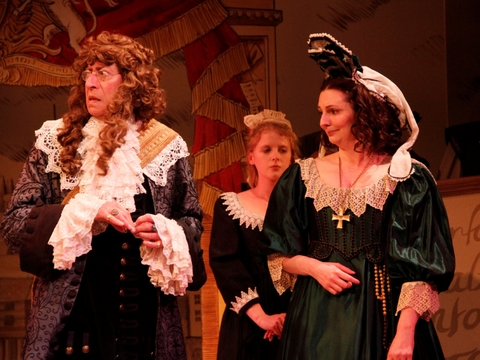 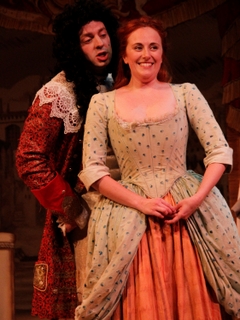 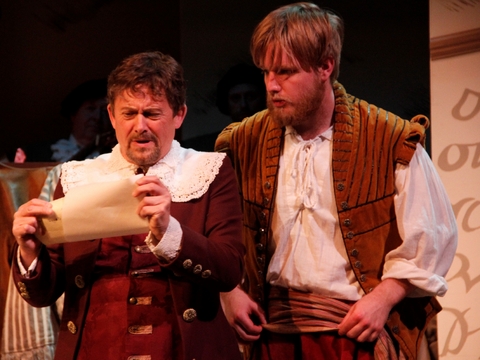 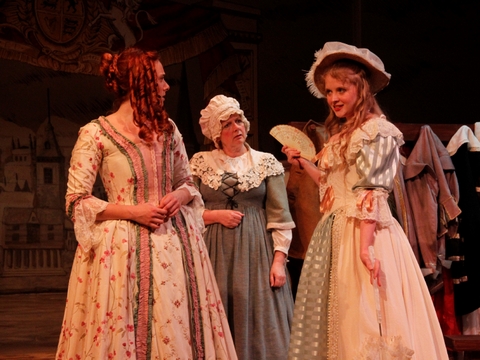 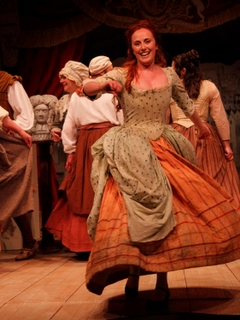 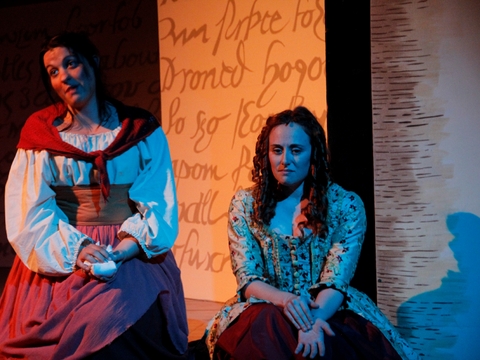 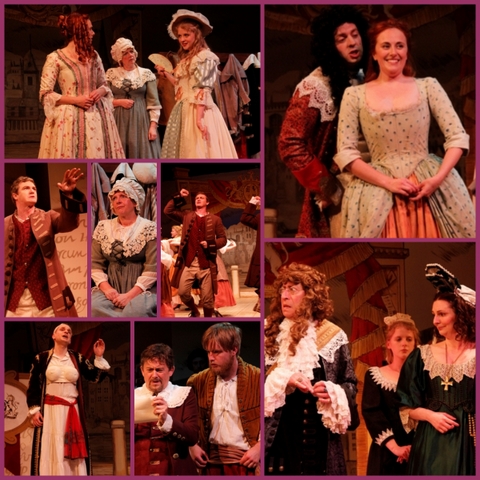 Saucy lyrics to hummable tunes, colourful costumes and a vibrant set combined with the delivery by a talented cast to make this delightful romp a great theatrical evening out.

The tale of the rise of an orange seller with a dubious past to important actress and mistress of King Charles II is cheerfully told amidst concern in the restored life of theatre and in court intrigue, with merry songs and dances interwoven through the plot.

Sprightly, cheeky and appealing, Nell is brought to vivacious life by Pamela Cuthill who underpins her characterisation with Nell’s ability to show her vulnerability for all her cockney bravado. Aided in the earlier scenes by her theatrical tutor Charles Hart the leading actor of the King’s Company, Nell grows in aptitude and ability, encouraged so ably by Mr Hart to whom Andy Kempton brings a combination of comedy and pride in his principal roles. Diva-esque himself at times he is out-divad by Robin Clark’s flouncing, threats and sweeping offstage in high dudgeon as Edward Kynaston, threatened in his roles as player of women’s parts, by Nell’s arrival in the accompany. Often on stage with ‘his’ feminine undergarments revealed, here was huge comedy outrageously delivered.

Soothing the tantrums, problems in finding suitable plays to perform and concern about rival companies, David Kay gave the King’s Company Manager, Thomas Killigrew, concern and exasperation, juggling with the various vicissitudes of the times. Finding new play themes was a problem, as was the company playwright John Dryden’s inability to finalise scripts – Jamie Heath giving Dryden a keenness and enthusiasm for his work which never seemed to be quite ready for the performance date. Cris Semple added a slightly dim ‘actor in training’ as Ned Spigget and Helen Dunford created Nancy, the Company’s Jill of All Trades, who became Nell’s dresser and friend, forced to turn, very comically, to an acting role herself when Nell deserted the Company to spend more time with the King. Her constant presence at court had the knock-on effect on her own family with Hannah-Millsted-Bowdery as sister Rose giving Nell support at first, then chastising her for not visiting her home, and Denise Scales as Old Ma Gwynn establishing an outrageously degenerate ‘Madame’ in her brief but notable appearance.

Consistent with the times, the court of Charles II bubbled with decorous in-fighting as Barbara Castlemaine, current favourite mistress, sensed competition from Nell. Danielle Lautier captured Castlemaine’s haughty security which is slowly undermined, much as Nell as favourite is then undermined by his French mistress Louise de Kéroualle, delightfully played with Gallic coquettishness by Jen Allum. Full marks here to all involved in the creation of those hats - one which de Kéroualle had bragged about wearing to the theatre, only to find herself ridiculed in a song sung by Nell and the Company promenading with a huge replica.

Another lady seen in full venomous flow is the King’s Portuguese wife Catherine with Gail Bishop not only mastering the difficult Portuguese lines but managing to deliver them with such malicious threat that we were in no doubt as to their meaning.

As the cause of all the jealousy, at Court and in the theatre, James Rolfe created a regal and very amiable King Charles, sincere in each of his various affections but, as with the historical times, a bit of an unstable grasshopper. As his advisor, Laurence Marsh as Lord Arlington, tried hard to control the King’s exploits but Arlington’s hauteur and self-interest seemed to be mocked rather than respected.

On-stage musicians under MD Helen O’Hara, Choreographer Louisa McAlpine and Keith Orton’s elegant set all combined to create a production which will certainly wow the audiences at The Minack Theatre when this production decamps to Cornwall to perform there from 10th – 14th July 2017.

Director Mike Millsted most certainly had a success on his hands in Caterham and this will, without doubt, be repeated for the lucky audiences at The Minack.

The court of King Charles II was ready to romp when it returned to England in 1660 after a decade of exile in Europe, and London was ready to party, after too many years of Puritan rule that had closed the playhouses.

Now that theme sounds entertaining and sure enough it was, as Nell Gwynn won the contemporary playwright Jessica Swale the Laurence Olivier Award for Best New Comedy only two years ago.

It is brought to the Minack by director Mike Millsted and a group of actors from Surrey that have become regular visitors over the years, so set designer Keith Orton knew that he had a ready-made ‘royal’ box, and a couple of granite pillars to ‘hang’ the stage curtains on, with 17th century London skyline cutouts completing a simple set.

The players fill the stage with the words, music, colour and sounds of merry England and saucy dialogue written along bawdy Carry On Nell lines, with a touch of class in deference to His Majesty.

A star is born when lippy strumpet Nell, a role embraced and artfully acted by Pamela Cuthill, is ‘discovered’ by the debonair Charles Hart (Andy Kempton) the leading actor with the King’s Company, who talks her into his bed and onto the stage.

The King (James Rolfe) is soon smitten by her straight-talking cheek, despite the loud protests of his Portuguese queen, Gail Bishop, who gives a short but stirringly demonstrative performance, finding the Court set-up “stupido” on several counts.

He ditches his former mistress (Penny Parker) but still dallies with a French contender in a large hat (Jen Allum) while the King’s Company headed by David Kay as the manager, and Jamie Heath as playwright John Dryden struggle to find new material – how about a drama involving a ship hitting an iceberg and sinking – no, no, too absurd they cry!

Despite the naughty aspects of the entertainment, Jessica Swale does make a serious feminist point about the historical introduction of women actors during the 17th century. You may recall that boys and young men invariably played the roles of women in Shakespeare’s plays.

Nell Gwynn was one of the earliest to take to the English stage and to be accepted, so in this piece we see Robin Clark appearing in costume with voluptuous false breasts strapped to his torso, playing an actor who had previously taken all the women’s parts. He is sensitive and thankfully not too camp about it.
In the meantime, Nell has to decide whether to accept the role of Lady Godiva and ‘Gwynn’ and bear it.