A celebration of a great English heroine, Anne Boleyn dramatises the life and legacy of Henry VIII's notorious second wife, who helped change the course of the nation's history.
Traditionally seen as either the pawn of an ambitious family manoeuvred into the King's bed or as a predator manipulating her way to power, Anne – and her ghost – are seen in a very different light in Howard Brenton's epic play.
Rummaging through the dead Queen Elizabeth's possessions upon coming to the throne in 1603, King James I finds alarming evidence that Anne was a religious conspirator, in love with Henry VIII but also with the most dangerous ideas of her day. She comes alive for him, a brilliant but reckless young woman confident in her sexuality, whose marriage and death transformed England for ever.
'What an absolute delight... a beautifully written piece of theatre...' Whatsonstage.com 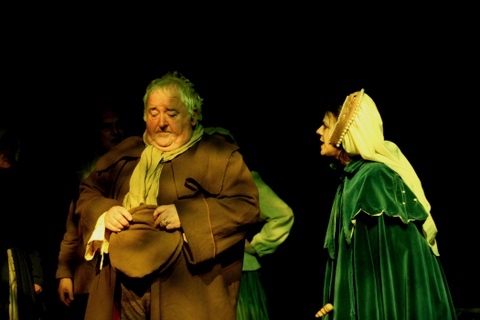 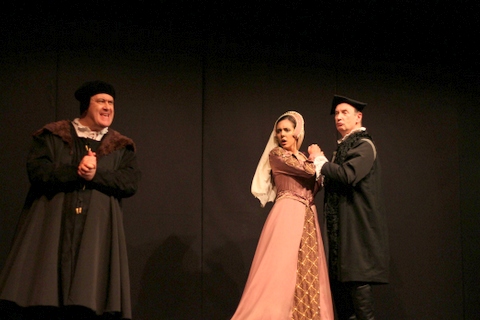 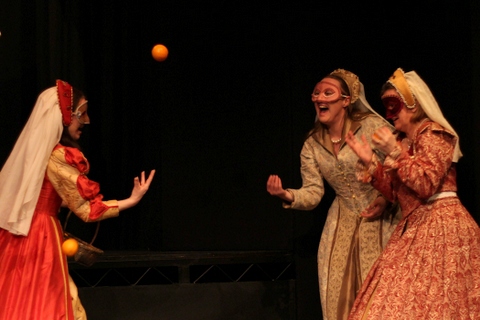 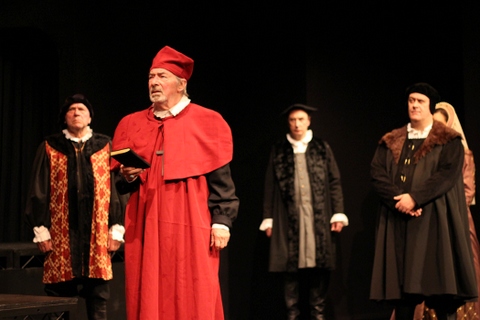 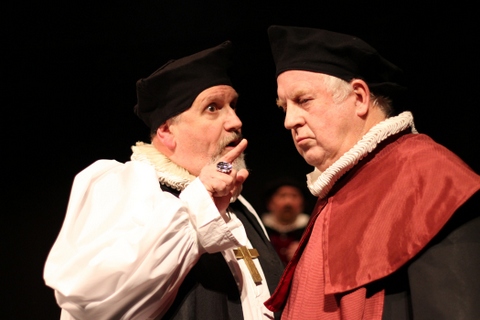 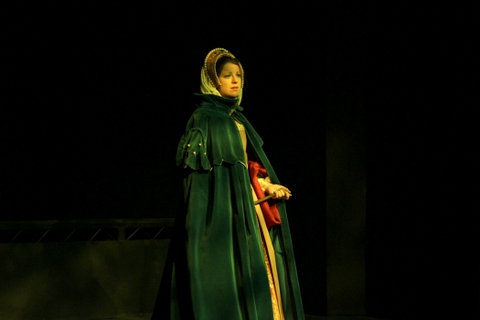 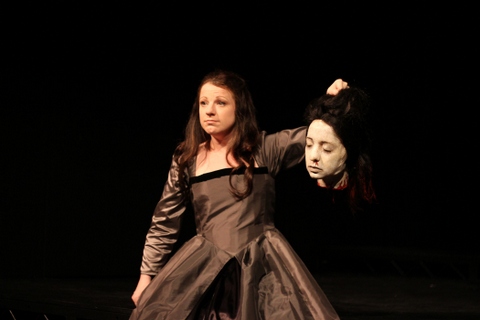 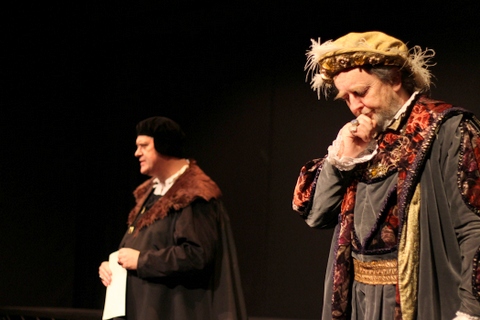 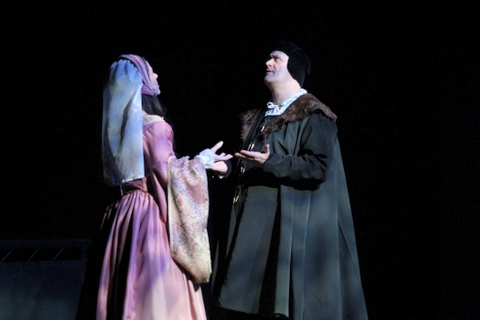 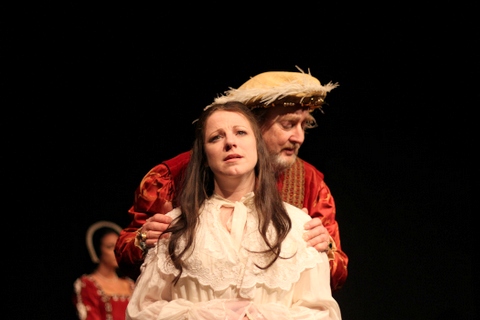 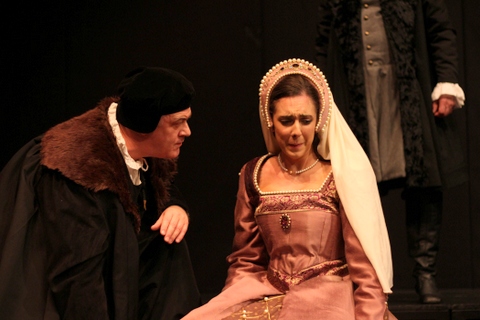 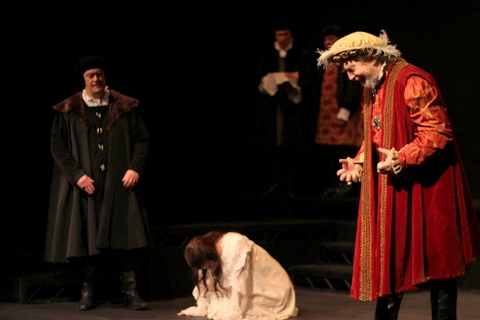 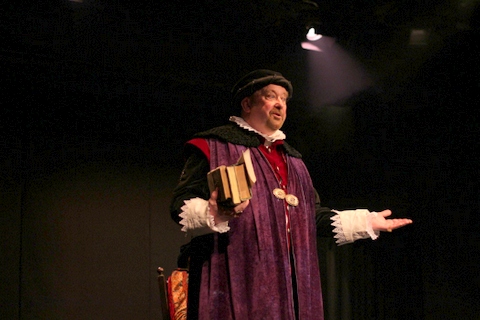 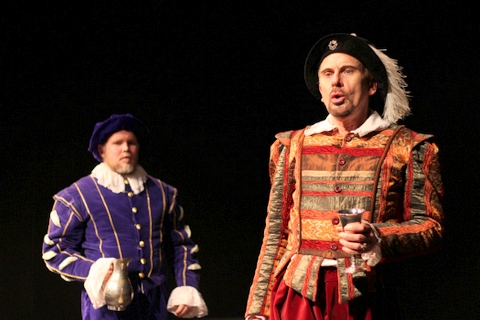 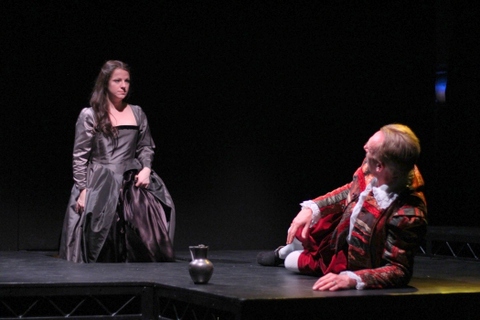 The quirky opening scene, with Anne chatting directly to the audience, teasing them about what may be in the bag she carries, certainly sets the tone for this interesting take on the Tudor tales of a lady who, one way or another, deeply influenced the course of our history. Showing the audience her copy of the William Tyndale bible and commenting that it, really, was the sword of her end, leads us through a play which reveals many different angles to both her and history’s story. Chirpy, cheeky but with many serious moments, Sarah Morrison brought to life an Anne easily accepted as attractive not only to Henry VIII but to those in his court too.

The main characters in her tale appeared, with the exception of Catharine of Aragon, and thus we met a plotting scheming Thomas Cromwell - a serious Mark Pendry, Peter Whittle as the regally clad but unbending Cardinal Wolsey and John Lacy as the impatient lover Henry himself.
The tale, which commenced so differently, diverged further from the expected as we meet King James whose reflective scenes endorse the impact Anne had had on his own reign. Peter Damesick conquered a Scottish accent and some cross-dressed dancing as James with Tony Richardson to do his bidding, as Parrot. As the spy in Anne’s court, Katie Kavanagh created an authoritative Lady Rochford whilst Stephanie DeWards waited her turn in the limelight as Lady Jane Seymour.

Other characters included the commanding Robert Cecil - Brian Miller, the secretive William Tyndale - David Burton and Jamie Heath as. George Villiers. Acolytes to the great and good knew their places - Chris Hearn as Simkin and Tony Dent as Sloop. The argumentative clergy had their say too with Phil Wright as Dr Reynolds and Keith Orton as Dean Andrewes. The doubling up by some of the cast peopled the stage with servants, country folk and guards, but even so the line-up for the final curtain was hugely impressive.

Costumes by Elizabeth Callow and her team made an accurate impact on the production and director Ian Grayson is to be applauded for his faith that such a large and talented cast could be found to bring this tale to life and for his set design which, plain to the eye and set on a variety of levels, gave the many scenes an individual air.

To mount such a demanding play, as an amateur company, with its many requirements in every aspect, was bold indeed and the prolonged applause which rang out for such courage deservedly rewarded both the director and his talented cast.