It has been called the funniest farce ever written and features the desperate efforts of a troupe of actors to keep a touring production of a dud comedy on the road, despite a series of chaotic events being played out off-stage. Here, with the use of two ingenious sets, we see these increasingly distracted players both on-stage and behind the scenes, accompanied by slamming doors, sulky girls, jealous lovers, an inebriated burglar and a plate of obstinate sardines. It all adds up to an hilarious and classically comic piece of theatre. 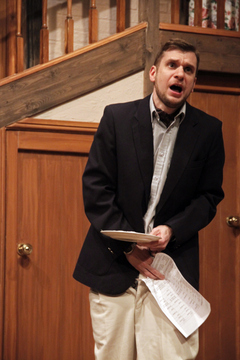 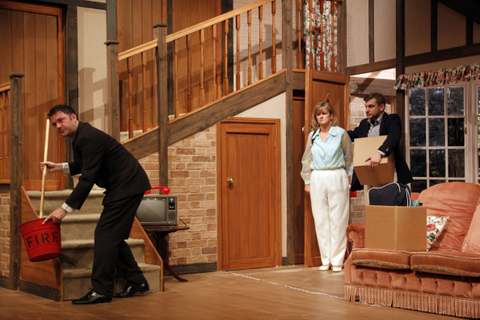 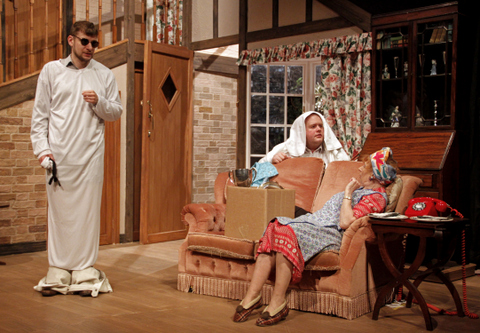 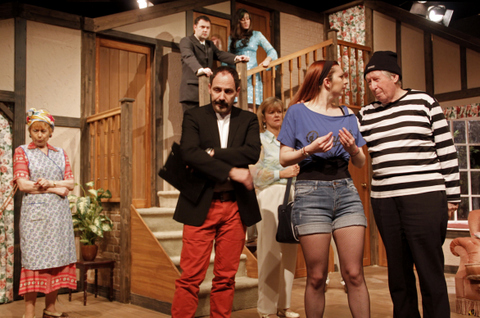 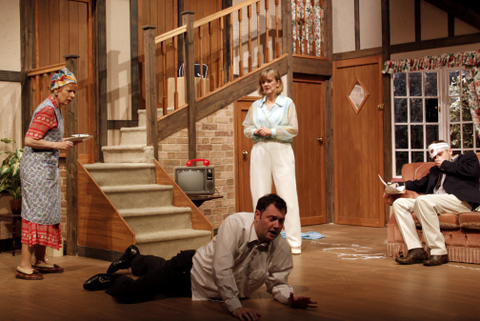 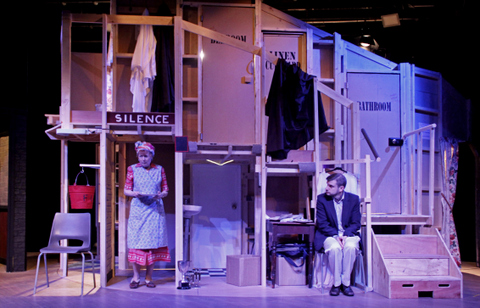 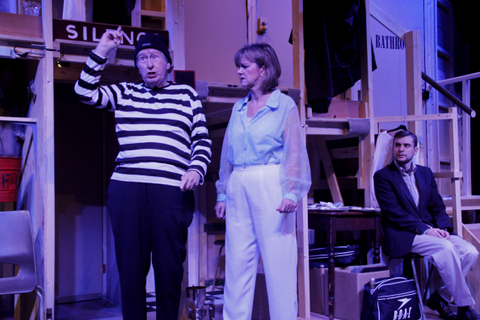 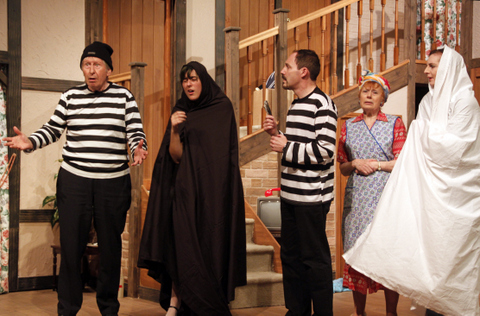 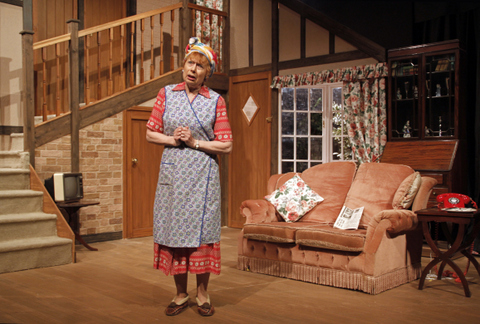 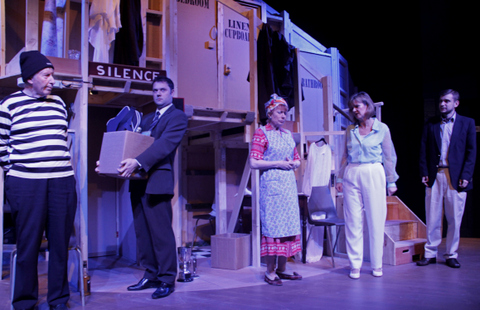 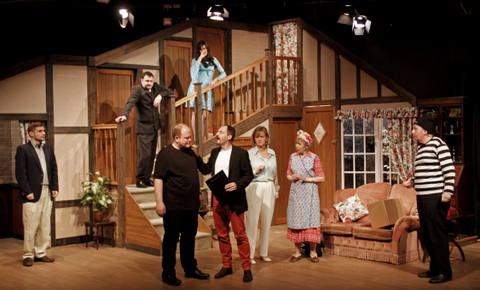 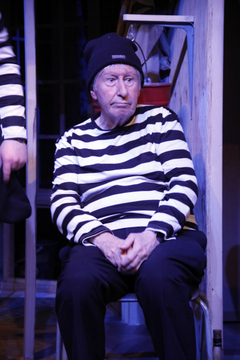 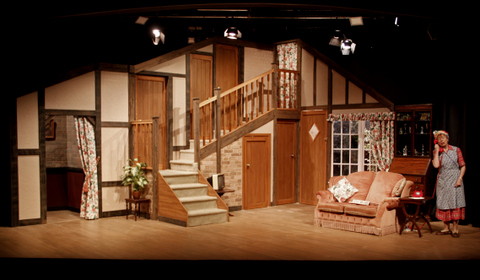 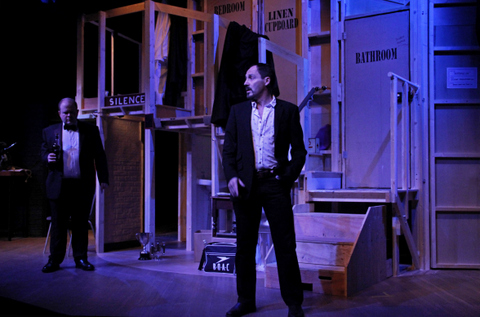 With a set that has to turn inside out for Act II and that same Act performed with feverish actions but no words, Noises Off is, to put it mildly, a challenging comedy to perform. Aided by their revolve, turning the set back to front was speedily achieved as we followed the theatre company touring Nothing On through its vicissitudes of a dress rehearsal, where lines and moves remained unlearnt and some doors on the set obstinately refuse to open/close, to a major falling out amongst the cast as the tour progresses.

Mrs Clackett housekeeps the home that the Brents rent out. They live in Spain but carefully creep back under the income tax radar for their anniversary weekend. Roger Tramplemain from the letting agents coincidentally arrives for a bit of nookie with his girlfriend Vicki and a burglar thinks he is robbing an empty house. Doors to many rooms open and close with split second timing, so no-one meets, and the mystery of the moving plates of sardines which Mrs Clackett plans to eat in front of the TV adds further chaos.

Nikki Packham as the dotty housekeeper Mrs Clackett creates a forgetful ‘lovey’ of an actress, stealing the comedy in the opening scene whilst Kevin Hayes as Lloyd Dallas, the director of Nothing On, grits his teeth as he slowly runs out of patience during the long dress rehearsal with his pleas and schemes getting more and more desperate. Peter Calver divides his talents in two as the letting agent Garry, happy in Garry’s shoes but less so as the actor playing him. Brooke Ashton is his hopeful conquest, with Laura Brand succeeding in making her a bit of a dreamer and adding to the comedy, as the actress playing Brooke, who causes no end of problems when she loses her contact lens. Poor Poppy is the company Jill of All Trades and Gail Bishop seesawed finely between getting the show ready for curtain up and her need to share some rather important personal information with Lloyd. Robin Clark and Linda Harris are the returning Brents – Linda making Flavia Brent the sensible one on stage and a go-between angry cast members off stage. Robin Clark used his comedy skills to create an insecure actor as Philip Brent and an equally needy character off stage. Michael Hall is Tim, the company set builder and odd job man as well as front of house. His Tannoy announcements to the Nothing On audience, together with Poppy, were very funny.
The final member of the Nothing On cast is Reg Anderson’s Selsdon – the burglar – keeping everyone on their toes to stop his devious plans to get his hands on anything alcoholic.

As relationships amongst the cast are stretched, so we, the audience, are treated to a manic scene of actors trying to perform Nothing On whilst wreaking vengeance backstage during the show. The slick transferring of the lethal-looking axe was excellent. The comedy continues as the set revolves once more to the front and Nothing On slowly falls apart, the actors having to improvise to cover calamities.

Keith Orton’s set design is ingenious, the biogs for the Nothing On cast creative and the full houses for the show, satisfying. Holding all the strings, Peter Whittle achieved a fabulous farce through great direction and the support of a very talented cast.

Michael Frayn’s comedy masterpiece, Noises Off, may be thirty-three years old but its timeless brilliance still places it firmly on top of “The funniest plays ever written” pile. It actually took the playwright years to develop, and even longer if you count the number of times Frayn re-tweaked its chaotic finale. But the result is pretty much the perfect theatrical farce (although one would be wise to avoid the awful 1992 film starring the wasted talents of Michael Caine, Denholm Elliott and Christopher Reeve – farces do not transfer well to screen and Noises Off is no exception).

Noises Off is famously a farce within a farce and tells the tale of a dysfunctional professional acting company rehearsing and then touring a farce called Nothing On, which starts badly and manages to get steadily worse as it travels the country. The first of three acts sees a desperate late-night dress rehearsal ahead of the show's opening the next day; the second sees the same action repeated but midway through the tour, and from behind the scenes (Noises Off) where tensions are strained to say the least; and the third sees the production descend into complete chaos on the final leg of the tour.

This week, Caterham’s incredibly well-run Miller Centre Theatre Company takes on the impossible challenge of reproducing perfection and, despite the odd flaw, has done an excellent job. Under the direction of the very capable and almost over-experienced Peter Whittle (not to be confused with UKIP’s current Mayoral candidate), the mammoth task of rehearsing three increasingly warped and twisted versions of Otsar Productions’ opening act of Nothing On is being appreciated by 100% sell-out audiences. I’m told the theatre’s box office even has a waiting-list of nightly hopefuls in case the odd ticket becomes available.

Firstly, Keith Orton’s authentic country house set design instantly impresses, enjoying a deserved and spontaneous round of applause as soon as the curtains part. Built and decorated from scratch by a thirteen-strong team the demands of the play’s two-storey, nine-door (well, eight doors and a window to be precise) set are well met. The Miller Centre’s steeply raked, two-hundred seat auditorium and pros-arched stage do their best to obscure sightlines accompanying any high set, but Orton’s brilliantly revolving and surprisingly sturdy one-piece design reliably serves all angles.

Kicking off proceedings onstage and introducing on Mrs Clackett’s famous plate of sardines is the very experienced Nikki Packham – in her second stint as Dotty Otley (the first being 2008). It’s these very sardines, of course, which named our magazine and Packham does extremely well in the role in terms of comic timing as well as fish-management. Kevin Hayes, another well-established performer on the amateur circuit, does well to bring a nice sense of authority and worldly wisdom (not to mention a fair share of womanising) to the role of Nothing On’s director, Lloyd Dallas. Hayes' natural energy an increasingly volatile stress levels in act two are spot on.

I particularly enjoyed Peter Calver’s high-energy performance as Garry Lejeune. The self-appointed spokesman for the troupe of actors is a joy to watch, especially later on with his hapless attempts to reach the final curtain despite all around him literally descending into farce. Robin Clark provided a nicely original touch developing Freddy's relationship with his cardboard-box comforter, and also worthy of special mention is Reg Anderson’s lovely old-timer portrayal of Selsdon Mowbray – the actor who has seen it all, done it all and is probably well past his sell-by date.

Barring one gripe, full marks were indeed there for the taking. The great skill in nailing this comedy – and any farce for that matter – is to play it for real; completely naturalistically, and let the writing do its job. I did feel that throughout first act and into the start of the second, a heavy focus was put on conveying the plot at the expense of the naturalism and pace – to a point where most lines were being announced rather than naturally played out. Yes, the all-important mechanics must be overcome, but it’s the nine hilariously-written characters that ultimately make Noises Off so funny. The writing is brilliant, so there’s no need to slow the rhythm down in order to bang the audience on the head with it – they’ll get it.

Despite my single reservation (which in no way should detract from a great night’s entertainment), the audience on the night – especially the Noises Off virgins – were positively rolling in their seats with laughter. So job done, I’d say!