This chilling mystery thriller by the author of Rosemary's Baby explores the thin line between fantasy and reality, madness and murder. Students Susan and Larry find themselves as guests enticed to the Brabissant mansion by its dissolute caretakers, the lonely Mackeys. Struck by Susan's strong resemblance to Veronica Brabissant, long-dead daughter of the family for whom they work, the older couple gradually induce her to impersonate Veronica briefly to solace the only living Brabissant, her addled sister who believes Veronica to be alive. Once dressed in Veronica's clothes, Susan finds herself locked in the role and locked in Veronica's room. Or is she Veronica, in 1935, pretending to be an imaginary Susan? 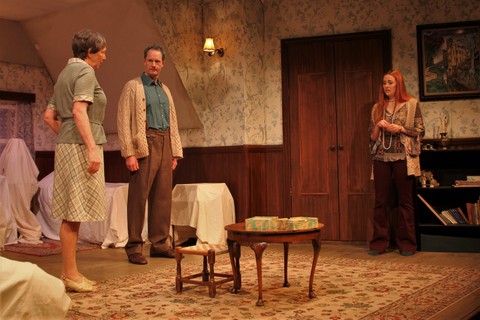 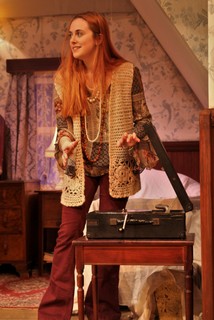 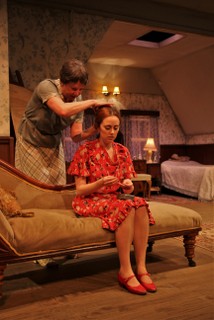 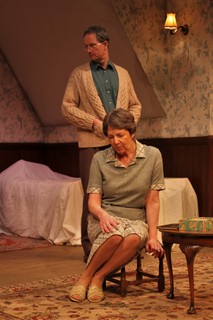 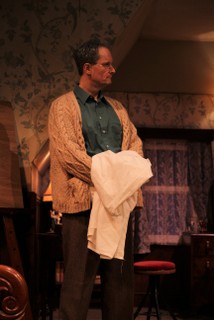 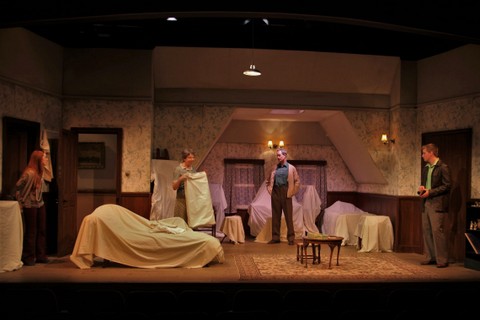 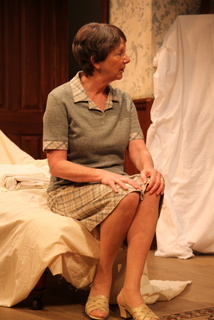 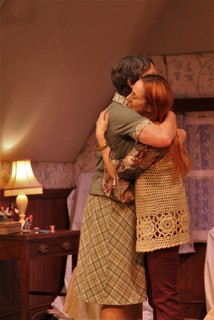 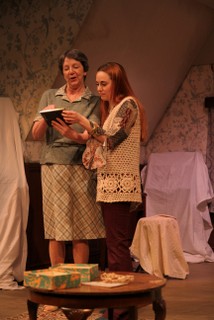 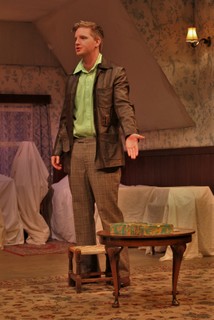 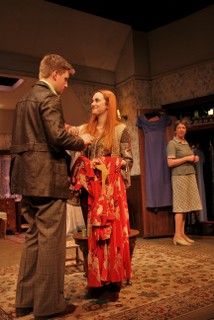 This dark Ira Levin mind-games play had more twists in it than the chignon created on stage to change a long hairstyle. We meet additional characters than just the four in the cast. We more than appreciate their skills in transforming themselves with diverse and convincing accents, body movements which spoke volumes and a concerted and achieved desire to raise the tension to gasp-worthy heights.

To review the story without spoilers is impossible and to be avoided. Suffice to say it all begins believably and gets complex very fast. Pamela Cahill, as the young girl of the chignon, inhabited a role full of anger, frustration, fear and submission by turns, strongly helping to raise the anxiety bar. Her crumpled body language as opposed to her feisty declarations took her characterisation to opposite ends of the acting spectrum.

The characters are not given names in the programme, for reasons those who see it will understand. Thus Chris Sempil as Boy changed from a lethargic youth to a callous and sadistic adult in a credible about-turn so necessary for the plot but one he fully achieved. More complexity was demanded of Woman, played so calmly at the onset of Act 1 by Sally Bosman. To her fell the demands of radical character changes, having led us, the audience, competently up a genteel garden path, little suspecting her chameleon qualities. As Man, David Sanders not only created an effective age change but gave another initial calm personae soon exchanged with evil vindictiveness. His unruffled character delivered one of the well-studied accents, equalled by Woman when in her calm role.

The room of the title is a large attic, delivered on to the stage complete with eaves, in a design by Tony Dent. Furniture and props are very important to the realisation of this play and here Jane Bishop should take a well-earned bow. Costumes by Berry Butler added atmosphere. When, as there was on opening night, silence at the end of a play because the audience can’t quite believe the way the story took them, then it is obvious that the cast have delivered an amazing piece of theatre – all planned, enhanced and delivered by director Niall Monaghan, to whom much credit is due.

The Miller Centre Theatre, tucked away next to the M25 on the southern outskirts of Greater London, provides the residents of Caterham with a year-round programme of theatre courtesy of one of the most well-organised membership bases I’ve seen in amateur theatre. You can read about the society’s heroic set-designing efforts needed to bring Noises Off to the stage last December in our very latest issue. With The Hound of the Baskervilles forming a nice January sandwich, February’s winter warmer is a thriller from the pen of Deathtrap's Ira Levin – the utterly chilling Veronica’s Room.

Levin’s great skill in putting the frighteners on us, apart from being a master of suspense, is by continually featuring a group of protagonists who could easily be living next door to any one of us. On the face of it all perfectly lovely people but, as shown in his most famous work, Rosemary’s Baby, some of whom harbour the most deeply dark and disturbing secrets. So here we are, in 1973, enter Man, Woman, Girl and Young Man. A sweet old Irish couple called John and Maureen, and the much younger Susan and Larry, another couple who are enjoying only their second date together. John and Maureen have invited the youngsters back to their Boston home after meeting them in a restaurant and commenting on the striking resemblance Susan bears to Veronica – the deceased sister of the senile and terminally ill Cissie who they care for. Susan is asked by the compassionate couple if she will consider impersonating a young Veronica in front of Cissie to offer her reassurance and comfort before she dies.

A bit creepy maybe, but a pretty innocent request made with good intentions.…and I wouldn’t dream of telling you any more than that! In her second appearance in the role, Pamela Cuthill excels as Susan, the carefree, flighty young girl enjoying the 'peace and love' of 70s America. Unfortunately, for obvious reasons I can’t comment on her character as the play progresses but here’s an actress who has gotten right under the skin of the role; and is a joy to watch. Likewise, David Sanders and Sally Bosman are completely convincing in their Irish Brogues, and even more so after the interval. And completing the quartet Cris Semple’s subtly suspicious Larry adds to the tension as he cynically suggests to Susan that the elderly couple may have an ulterior money-driven motive in asking Susan to dress up as Veronica.

Separately, all four present their roles with assurance, but together, the synergy is electrifying. Deftly directed by Niall Monaghan, enjoying Tony Dent’s superbly authentic set design (aided by the 13-strong Miller Centre team needed to build and decorate it) and under Martin Swain’s super creepy lighting, this is a production that will surely stand out at the end of this season as a major highlight.