Arcadia takes place in the stately home of Lord & Lady Croom in Derbyshire in two separate times: the Regency period and the present. 1809 finds a household in transition, where an Arcadian English garden landscape is being uprooted to make way for picturesque Gothic gardens, complete with hermitage. Meanwhile, brilliant thirteen-year-old Lady Thomasina proposes a startling scientific theory that is only starting to be figured out more than 200 years later. In the present day, we find the descendants of Lord and Lady Croom and two competing scholars researching a possible scandal at the estate in 1809 involving Lord Byron. What results is a brilliant comedy the New York Times called, ‘the perfect blend of brains and emotion, wit and heartache’ in which everyone tries to puzzle over the meaning of the universe, and each, in his own way, is blindsided by the attraction that Newton left out of his equations. 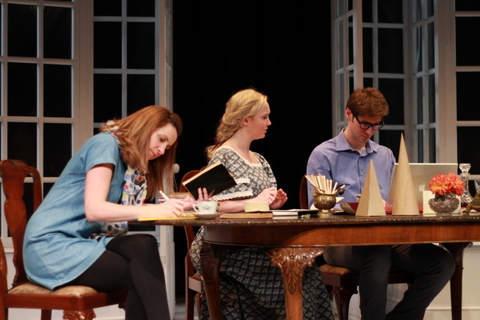 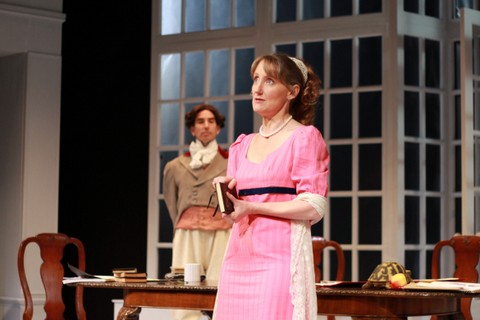 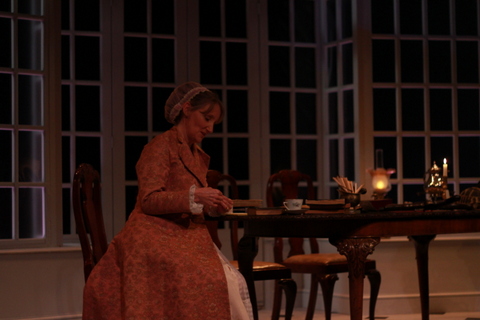 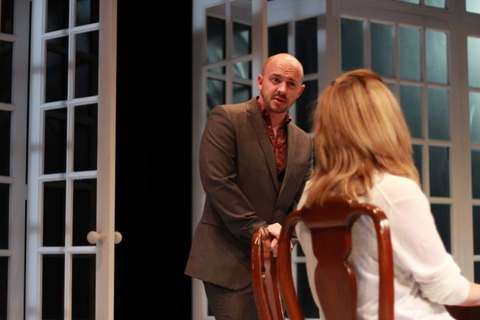 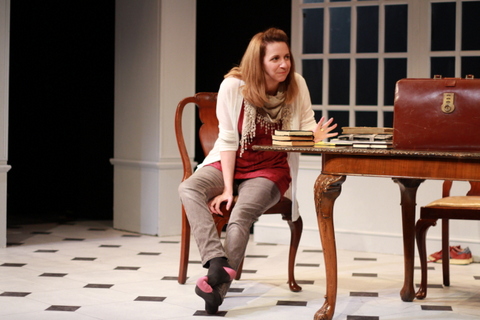 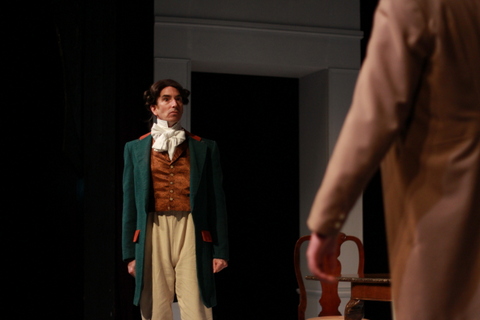 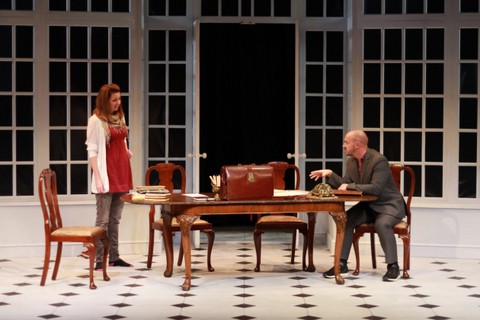 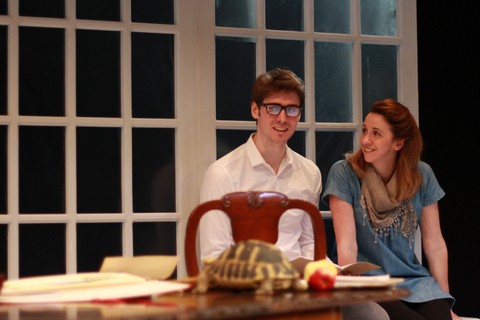 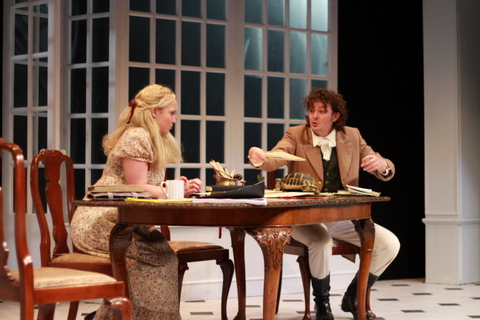 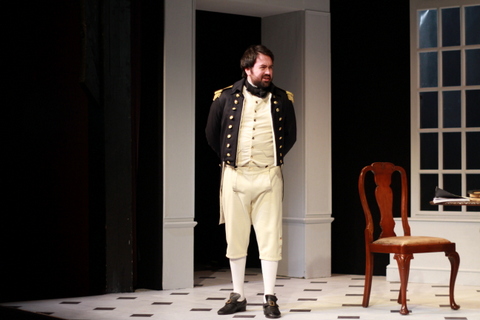 Reviews, as I constantly reiterate, are just one person’s opinion. An educated and informed opinion it is to be hoped, but still just an opinion. Tom Stoppard’s fascinating and deeply complex play involves, as one of its many strands, the outcomes of reviews, one given by Septimus in 1809 to a work by Mr Chater and another given by Bernard Nightingale to a book by Hannah Jarvis. Criticism and comment bit deep in both cases and events were influenced by them.

Set in the garden room of Sidley Park, Martin Swain’s design was outstanding. A huge conservatory wall of wood and glass and a large central table served for the action in both 1809 and the present day where time-zones jumped easily from one to the other, each zone with its own characters, some of which were connected to the past.

Charlotte Leonard as Thomasina Coverly was required to grow from a precocious 13-year-old to almost 17, ever curious she was set the task by her tutor Septimus of working to solve Fermat’s Last Theorem – a daunting assignment. Petulance, childish body language and voice were all harnessed to achieve this important transformation while her mathematical mind pondered on why if one stirs jam clockwise into a rice pudding, stirring it anticlockwise does not undo the jam and the pudding remains pink.

Tutor Septimus, something of a rake, evolved to be the enigma of the play, but we only meet him as an educated young man able to think fast on his feet and extract himself from tricky situations, with Aaron Homes’ giving him a comic, light and effective characterisation.

Thomasina’s mother is Lady Croom with Jane Monaghan creating her as ‘she who must be obeyed’ but also allowing a saucier side to show too. In the hands of Richard Haslam, the much-cuckolded Ezra Chater vacillates between anger and simpering under praise, soon forgetting his wish to ‘call out’ Septimus for consorting with his wife.

Landscape designer Richard Noakes provides another strand to the tale helping Lady Croom to redesign her garden with Keith Orton making him knowledgeable and insistent but a little afraid of Lady Croom. Adam Stevens is Captain Brice - Lady Croom’s brother who complicates the plot further by an affair with Mrs Chater whom we never meet but know a great deal about and Ryan Mullen plays both Augustus Croom in 1809 and Gus Coverly in the present day. Tony Dent is the butler Jellaby who adds to the confusion with gossip.

In the present day Hannah Jarvis is working to uncover the presence and name of a hermit she believes lived in the grounds of Sidley Park, for her study on hermits, with Tamsin Reeve making her determined, intelligently argumentative and slightly militant but with some soft edges. Her sparring with Bernard Nightingale, who erroneously believed that Lord Byron shot and killed Ezra Charter in a duel, is certainly lively. Jay Rolfe is Bernard, who spends much of the play emphasising his Byron theory, who shines in the rehearsal of the lecture he intends to give on the subject.

Valentine and Chloe are direct descendants of the 1809 family with Christopher Spear an erudite Valentine, working on his own theories and Pamela Cuthill as Chloe who has her own and entirely different thinking to purport.

I have mentioned ‘strands’ and the play can be confusing because there are so many. Some are buried deep in mathematics and some are as easily-followed as the jam and rice pudding incident already mentioned.

Incidental music, composed and played by Ian Rae added charm to the whole, both the period and current costumes by Berry Butler conjured up their specific eras and the play was directed by Niall Monaghan to whom many congratulations, firstly for understanding Stoppard’s intricate script and secondly for bringing Arcadia so astutely to life on the stage.