Moscow, 1938. A dangerous place to have a sense of humour; even more so a sense of freedom. Mikhail Bulgakov, living among dissidents, stalked by secret police, has both. And then he’s offered a poisoned chalice: a commission to write a play about Stalin to celebrate his sixtieth birthday. Inspired by historical fact, Collaborators embarks on a surreal journey into the fevered imagination of the writer as he loses himself in a macabre and disturbingly funny relationship with the omnipotent subject of his drama. John Hodge’s blistering new play depicts a lethal game of cat and mouse through which the appalling compromises and humiliations inflicted on any artist by those with power are held up to scrutiny. Won the Olivier Award for Best New Play in 2012. 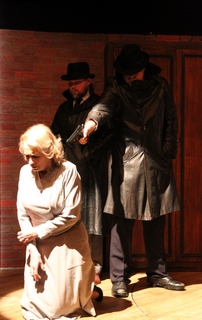 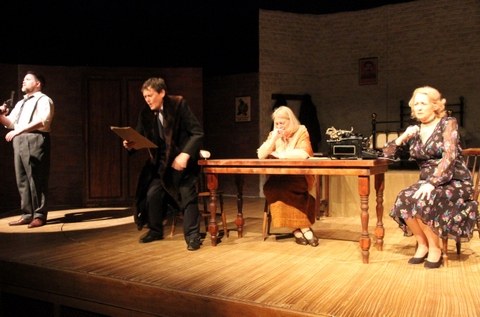 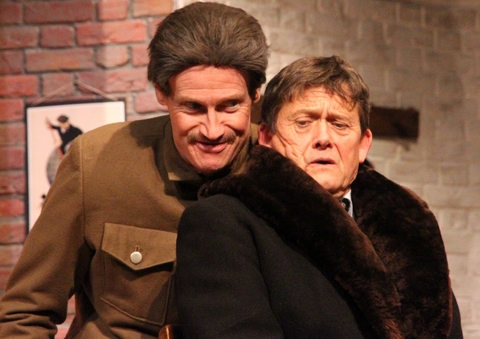 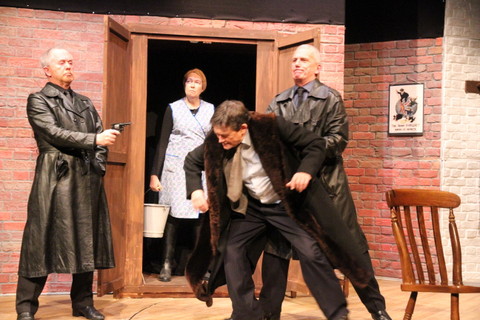 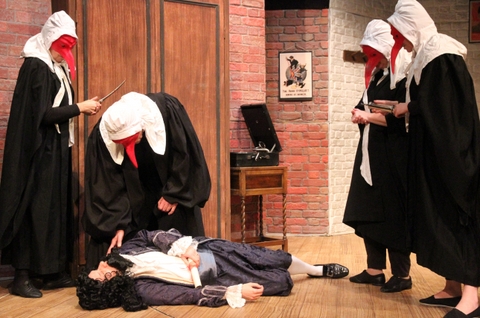 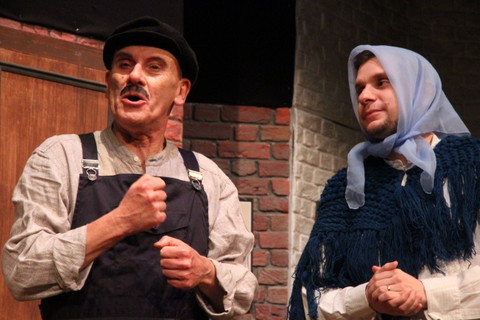 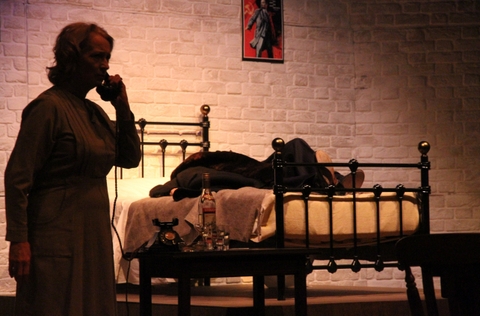 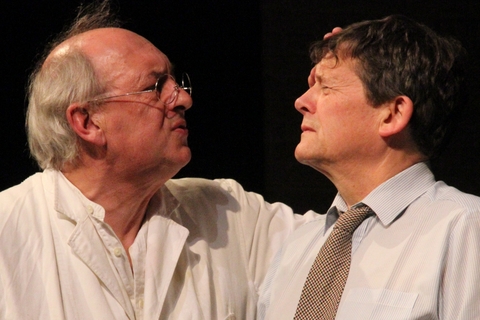 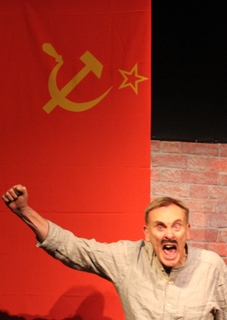 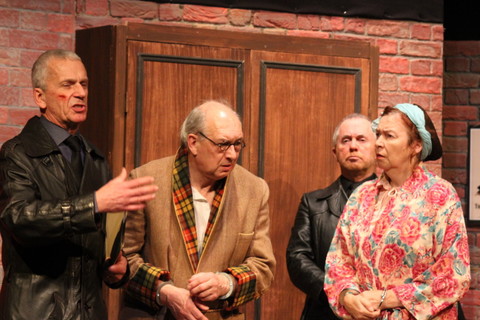 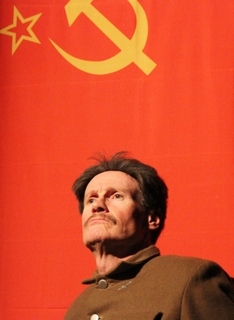 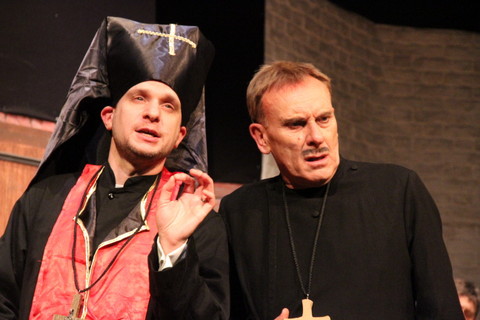 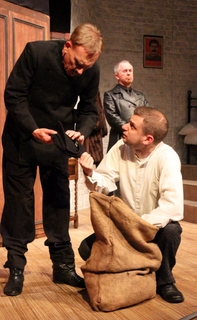 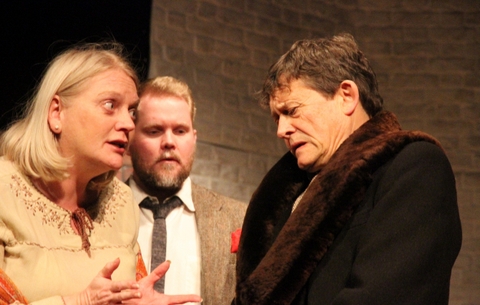 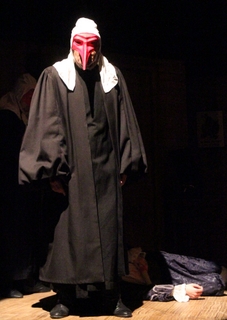 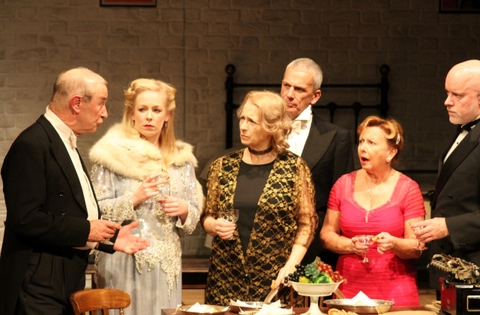 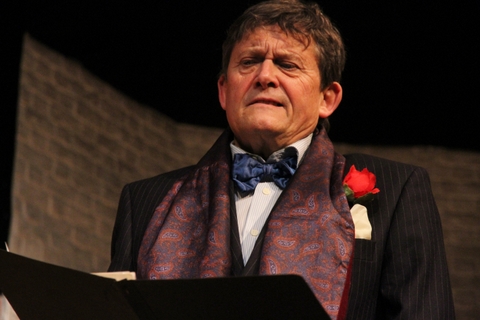 As the programme notes reveal, this is David Kay’s second crack at the complex character of Mikhail Bulgakhov and I was lucky enough to see him in this character at The Courtyard Theatre in Chipstead earlier this year. For this production, he delved even deeper into the difficulties and unawareness of some of Bulgakov’s actions, delivering a character pulled in many directions – to save his beloved play on Moliere which The People’s Commissariat for Internal Affairs (the NKVD) threatened to close after its opening night; not to confide in his loyal and beloved wife; not to foresee the results of some of his hastier actions and not to take better care of himself, knowing he was very ill.

Complementing the intensity of this characterisation, Suzi Whittle as his wife Yelena brought concern and sympathy to her husband which slowly dissipated as he kept secrets from her, leaving her confused and angry. A role played with empathy which changed to confusion and sorrow.

Using the success of the first night of Bulgakov’s play, the NKVD inform him that they want him to write a play about the young Stalin. If he won’t they will not allow any further performances of the play of which Bulgakov is very proud. Bulgakov tries to write such a play, but the words don’t come.

It is a pivotal phone call in the dead of night which leads him to a rendezvous with Stalin himself, so confidently played by Russ Gregory, complete with illusions of grandeur and overtones of evil. A deal is done. Stalin will write his own play and Bulgakov will deal with papers which need Stalin’s signature to run the country. Although billed as a comedy, and a dark one at that, it is Bulgakov’s lack of understanding and sometimes rather frivolous signing of these papers that, the playwright invents, lead to The Great Purge and huge suffering to several million Russians, including some of Bulgakov’s close friends.

Threatening and threateningly dressed in a long black leather coat, Jeremy Taylor is the militant Vladimir of the NKVD whose strong coercions persuade Bulgakov to write the play about young Stalin and he is pleased with the scenes as they are delivered to him, little knowing the author. Roger Dale is his equally severe sidekick.

Tony Richardson has many of the comic moments as Bulgakov’s doctor, albeit one more concerned with an infatuation with an actress than Bulgakov’s health, and Jan Kool is the cupboard-dwelling Sergei, sharing Bulgakov’s home in this small space. Vasilly, Praskovya and Grigory also share Bulgakov’s dwelling. Chris Hearn’s Vasilly is wise and still able to remember a time when there was plenty of food, Margaret Hey’s Praskovya is supportive and non-complaining and Jamie Heath makes much of Grigory’s ambitions to be a playwright, pleased to be friends with and take advice from Bulgakov.

Flashes of the Moliere play are re-enacted in splendid costumes by Berry Butler and Margaret Hey, and the cast from these excerpts – Peter Damesick, Robin Clark, Anne Gregory and Lucy Auva, appear throughout the play as various different characters.

Ian Grayson’s evocative set, fronted by huge red drapes emblazoned with the hammer and sickle, allowed the play to move seamlessly through its many locations of Moscow in 1938.

The mixture of real events, despair, comedy, intrigue and sadness combine to make Collaborators a fascinating play which, in the hands of director Ian Grayson, was first class.