This is a bedroom farce. Saucy, simple – and very funny. It concerns a lively lady named Harriet who lives a comfortable life in a luxury flat in Brighton. It is all paid for by two gentlemen – each unknown to the other – who pay the rent in return for the occasional comfort of Harriet’s bed. All goes well until the arrival of a stream of visitors. First is Harriet’s long-time friend Anne, a girl with an eye for the men and just separated from her husband. Then Anne’s husband, who has always carried a torch for Harriet. Finally, two suspicious wives looking for their husbands who, they think, are being treated in Harriet’s nursing home. Preposterous? Of course. But forget logic. Prepare for an evening of undemanding fun. 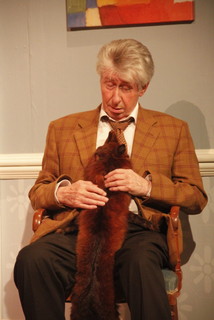 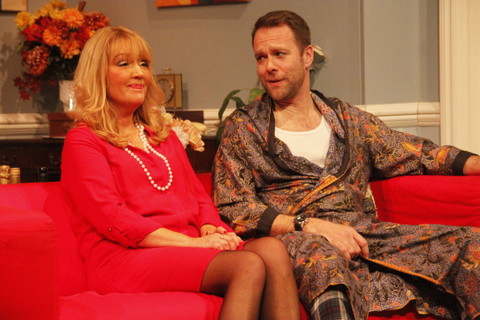 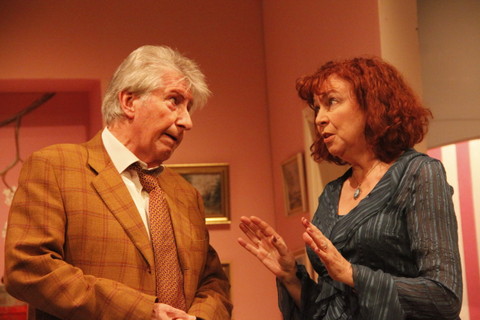 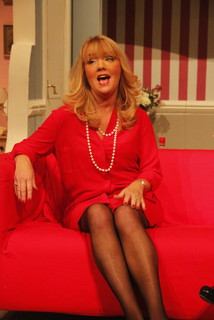 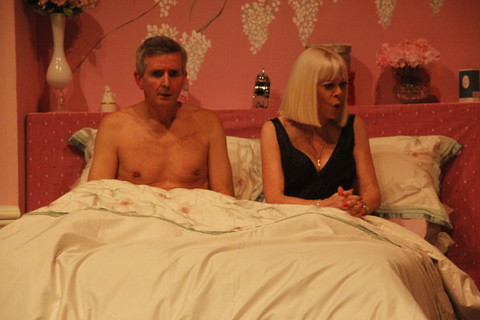 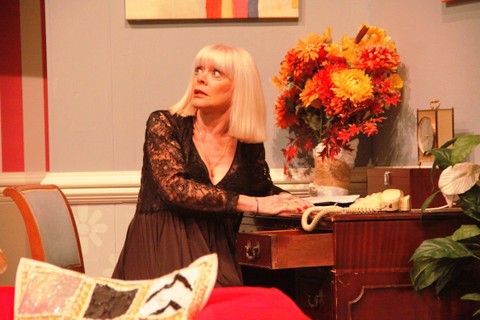 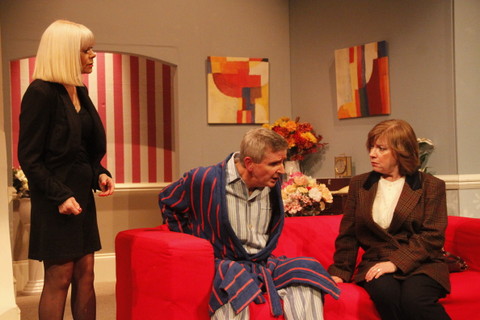 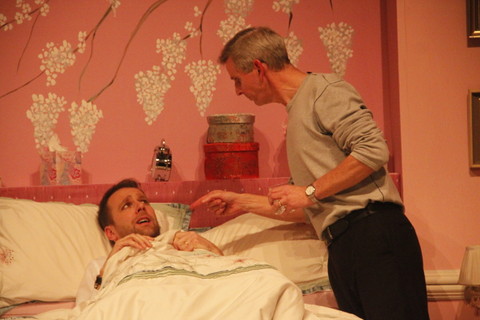 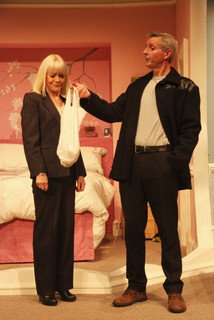 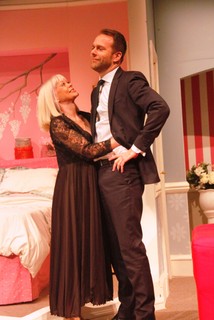 The applause from the full house which greeted the fabulous set for this show was certainly justified. Jenny Kingman’s design of a small but perfect luxury flat in Brighton with its bedroom and sitting room, was colour co-ordinated and reeked class – I particularly liked the mural behind the bed – reminiscent of Van Gogh’s Almond Blossom, but in pink.

Classy, too, are the cast who bring a comedy which borders on farce to life, with its vital timing and naughty connotations.

Harriet only affords this luxury flat because she is bankrolled by two lovers who must never meet. The lies, inventiveness, twists and turns are the mainstay of the plot when the two men inevitably do.

Allison Blair was the quick-thinking and plausible Harriet – never muddling her rent-payers names and giving them nick names for her all-important schedule. Played with calm in the face of chaos, the role was given real credibility, although we knew she was playing with fire.

New to the Miller Centre Theatre Company were two ‘finds’, Dan Jewell and Ewen Rose. Hailing from St Gertrude’s Theatre Company, they had their diverse characters down to a tee. Both characters are cheating on their wives. Dan Jewell as Gordon has become bored with his wife Magda and seems more fond of his hens than his wife. Corporate man that he is, his intelligence misses that he is sharing his mistress with another. Ewen Rose as owner of a trawler fleet Alec, visits from Grimsby when he can – usually bearing fish as a gift, whereas Gordon’s gift is usually eggs. These gifts play quite a prominent part in the plot.

This ménage a trois is thrown into disarray with the arrival of Harriet’s glamourous best friend Anne with Lucy Hanson adding to the mayhem, first as rejected wife and then aiding and abetting Harriet in her escalating machinations.

As Harriet’s explanations become more and more incredulous, Anne’s husband Richard arrives to declare he has carried a torch for Harriet for years with Reg Anderson, who seems to have cornered the amdram market in really comic inebriates causing more complications and confusion.

Finally we meet the two hard done by wives with Anne Gregory as Gordon’s Magda and Janet Edden as Alec’s Mildred. Both making their mark in their cameo roles.

This light-hearted and very well-rehearsed comedy brought smiles and laughter to an appreciative audience happy to exchange the cold and gloom of January for warmth, humour and a really funny production.

This is, in fact, Peter Whittle’s second round of directing this show – the first being with St John’s in Selsdon. Well – it seems silly not to make the best of a very good thing – and this was certainly the case here with this happy and uplifiting production.