Jane Austen’s story of the Dashwood sisters and their search for love is so sweet it brings tears to the eyes. Jessica Swale’s adaptation does it proud. We see Elinor and Marianne Dashwood, left in penury by the death of their father, trying to maintain their dignity amid the slights and injustices of their relatives. Elinor, herself tortured by the love of a man she cannot have, rescues her sister from an unsuitable alliance and settles with their mother in genteel poverty. Sustained by the kindness of new friends and distant relatives, the sisters live their single lives without the love and security they crave. But at the end, their lives are changed, their dreams become real and happiness embraces them warmly. 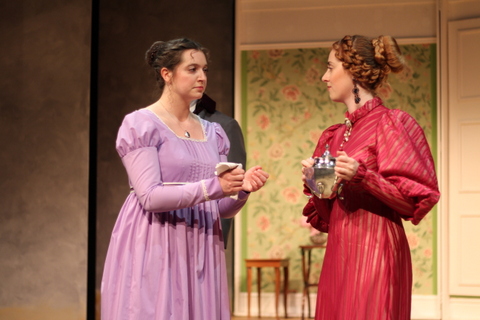 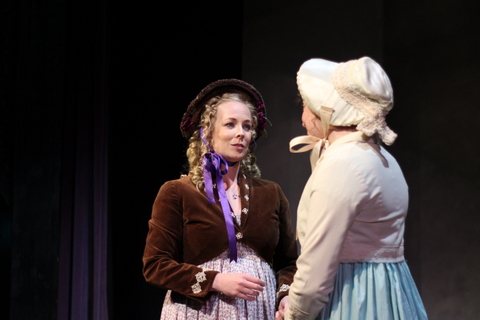 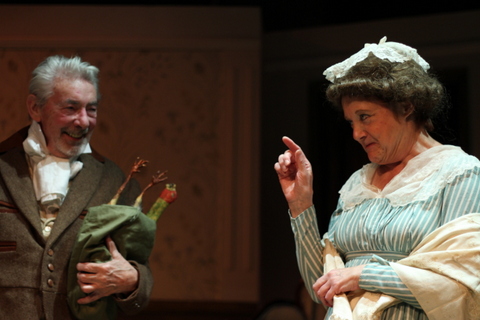 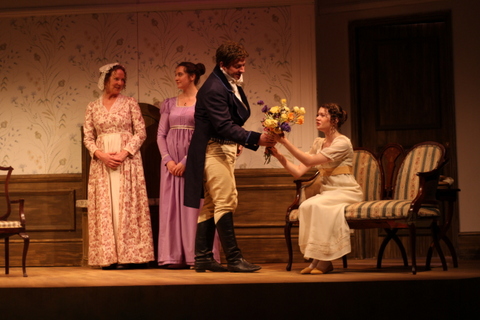 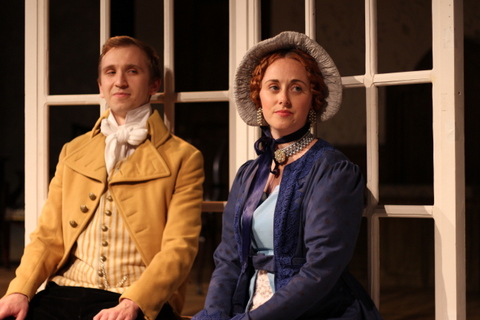 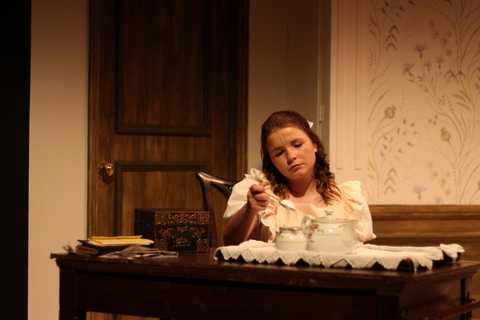 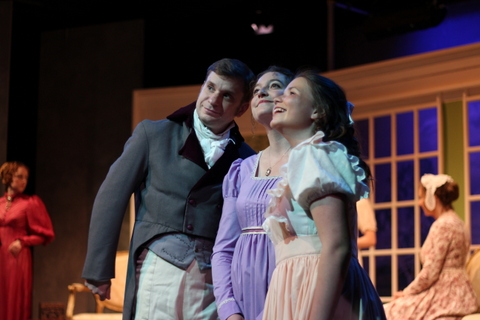 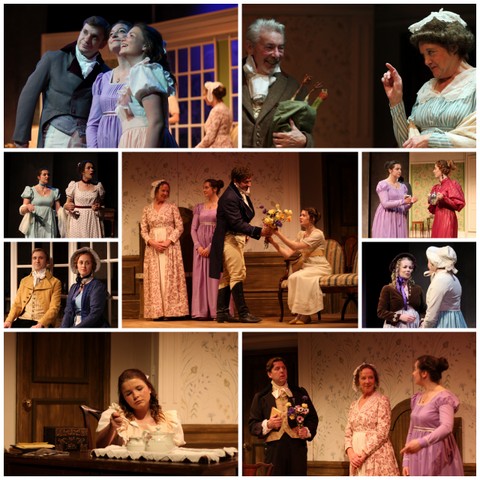 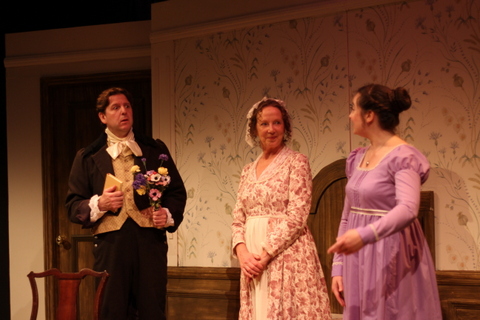 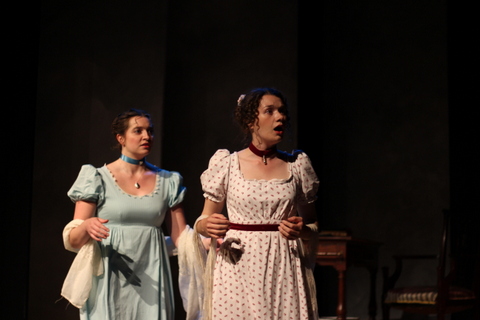 Jessica Swale’s adaptation of Austen’s famous story required a clever, workable set which would enable the tale to run smoothly between the many scenes without losing either pace or interest. Jenny Kingman’s design achieved this with the simplest of plans – the full length raised dais would be ‘inside’ and a central step down led to the full length stage front which was ‘outside’. Thus, with some speedily-achieved changes on the dais we were in the grand Norland Park or the homely Barton Cottage, with more venues in between.

Characters from the original were pared down and referred to in the script to keep the story true but, even so, the cast list is long.

Costume plays a large part in creating the reality of the period and here Elizabeth Callow and Nigel Kemp had crafted elegance and colour with the words ‘sprigged muslins’ leaping readily to mind for the three Dashwood girls.

As the ‘sense’ of the title, Penny Parker’s interpretation of the eldest girl Elinor brought calm, some hidden angst and a concern for her more impulsive sister Marianne to whom Lucinda Banton gave an admirable impetuousness – walking in the rain, taking a curricle ride alone with John Willoughby and dashing off affectionate letters even when they went unanswered. Not the etiquette of the period. Kit Bradshaw’s delightful Margaret, the baby of the trio and planning to be a naturalist, brought youthful humour to the stage – her love of her stag beetle for example.

Sally Bosman as their affectionate but rather weak mother made the best of their downgrading from the ease and graciousness of Norland Park to the cottage kindly loaned to them by Sir John Middleton. Sir John’s affability, here in Peter Whittle’s long-standing theatrical hands, will probably, he says in his programme notes, be his last appearance on stage. A consummate actor of some eighty shows, his Sir John did him proud.

Creating the contrast vital to the story, Robin Clark brought the tongue-tied Edward Ferrars to life. Using both comedy and sincerity, his dialogues with Elinor were full of Austen emotional understatement. In great contrast, Jay Rolfe was the roguish John Willoughby – ostensibly a hero rescuing Marianne from her fall in the rain, but ultimately being won over by the easy life marriage to the rich Sophia Grey would bring. Greed and avarice were also the bywords for the new owners of Norland Park – Fanny and John Dashwood. Pamela Cuthill went to town on a mean, spiteful, vindictive Fanny, wresting even her grandmother’s silver teapot from Elinor’s hands as she cast the family out. Matthew Stone was John, her ineffectual but equally grasping husband, transforming later into the doctor called to minister to Marianne who, once more, suffered from being caught in a downpour.

As the suitor, initially without much hope of winning Marianne, Jonathan Dolling’s empathetic and faithful Colonel Brandon finally won an older and wiser Marianne as his bride. As a contrast to his earnestness, Denise Scales brought laughter and lightness to the stage as Mrs Jennings – forever the matchmaker but full of joie de vivre.

There was more comedy in the interactions between Rachel Warren as the garrulous Mrs Palmer and Adrian Bowd as her henpecked husband. Never allowed to get a word in edgeways, the few words he was permitted to say brought laughter. A change of costumes gave him his other roles as the faithful servant Thomas and as Mr Perks.

Setting the proverbial cat amongst the pigeons, Lucy Auva’s rather flighty Lucy Steele dashed Elinor’s hopes of marriage to Edward, but in an ‘all’s well that ends well’ reveal, she released Edward from his long standing engagement to her on discovering he would be disinherited if they wed. Transferring her affections to his wealthier brother Robert resolved the dilemma and Edward could at last summon up the courage and the words to propose to Elinor.

Skilfully directed by Suzi Whittle, this gentle stroll through Austen’s landscape brought her world into sharp focus with its edicts, social requirements and underscored emotions. Easy on the eye with the charm of costumes and sets and easy on the senses with a much-loved story well told.