Mike Kenny’s imaginative adaptation was first staged at the National Railway Museum in York, and then at London Waterloo. Bobbie, Peter and Phyllis have their affluent Edwardian lives turned upside down when their father is accused of espionage and taken away by police and dwindling finances force the family to move to a rural village in the North of England. After the initial culture shock, they soon befriend the locals. But with little money and nothing to do, the children spend their days waving at trains bound for London to “send their love to Father”. When a kindly old gentleman waves back, their fortunes begin to change... 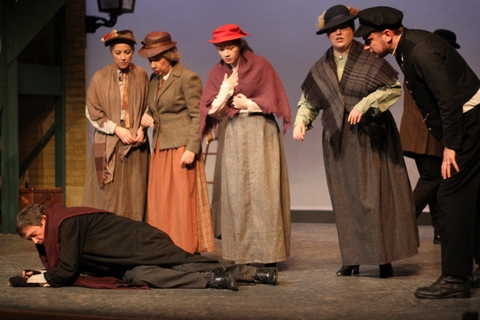 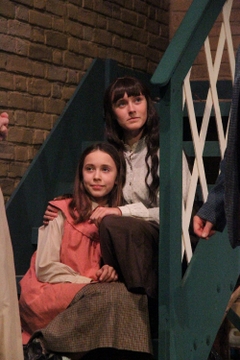 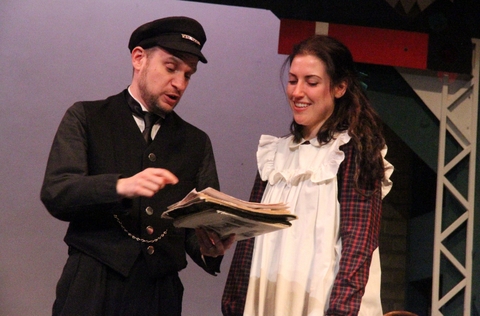 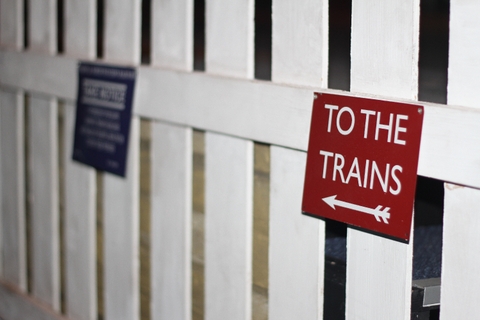 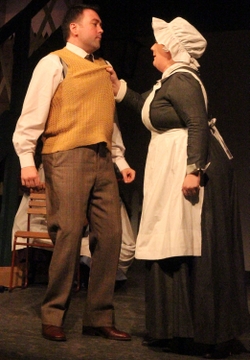 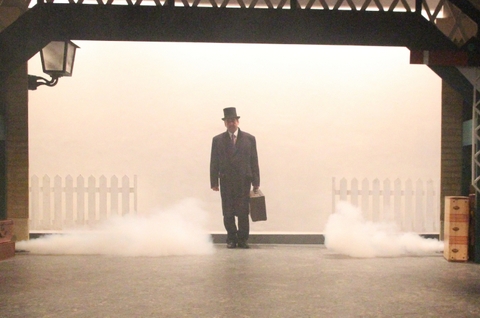 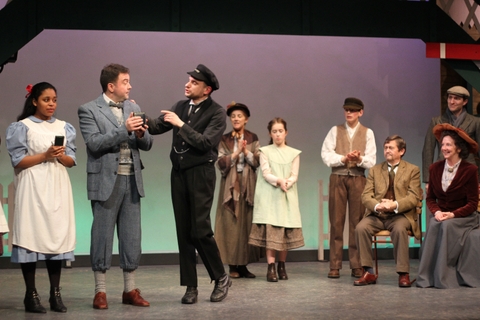 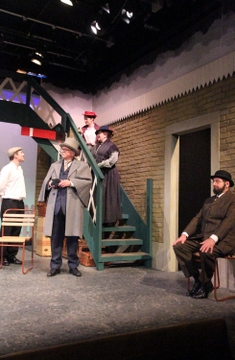 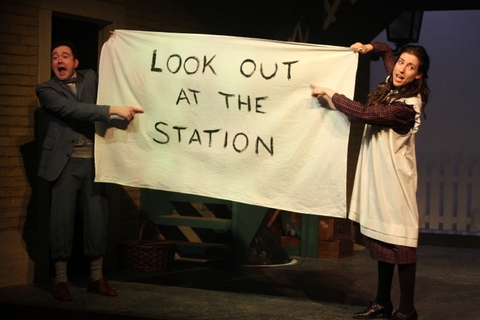 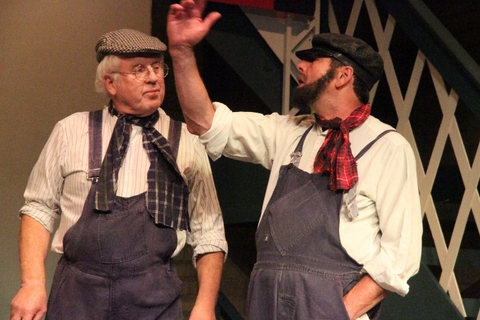 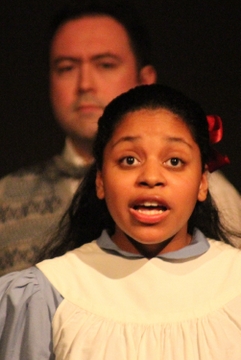 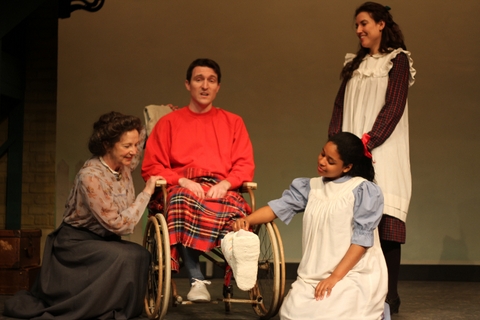 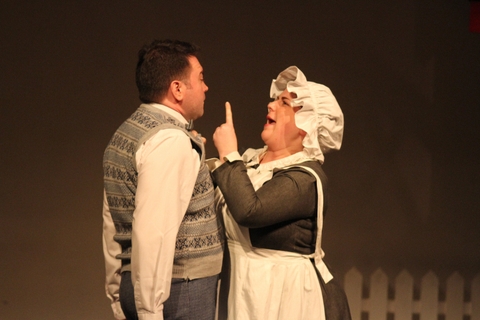 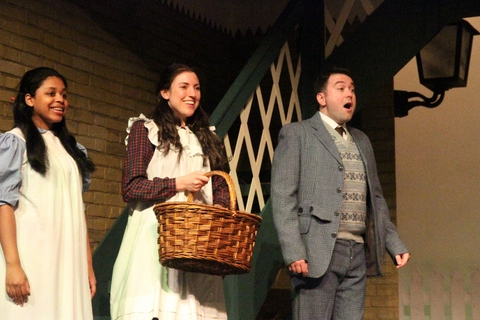 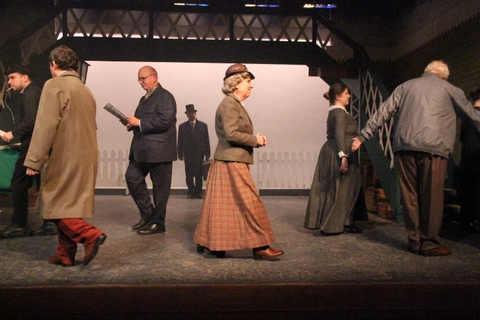 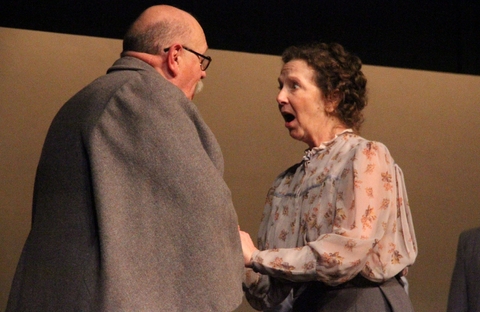 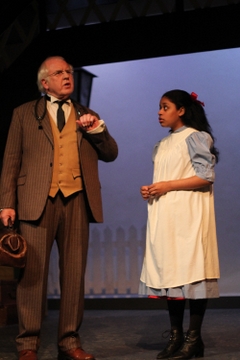 When I was ten, a school classmate was a girl called Jenny Hanley. Although it was kept low key, we knew she had famous parents - her father was Tommy Hanley and her mother Dinah Sheridan who, in the famous film of The Railway Children, is remembered still for her role as Mother. At the age of ten, we didn’t really appreciate the enormity of this fame but were later pleased that Jenny herself made it into TV presenting.

Familiar, as so many of us are, with this film, it has been interesting to see it taking on a whole new lease of life as a play adapted, from E. Nesbit’s famous book of the same name, by Mike Kenny. Its run at Waterloo Station, complete with the appearance of a real steam train, took the theatre world by storm. Locally, CODA presented it at the Charles Cryer Theatre in October 2013, with some props that made a welcome reappearance in this production, together with at least one reprise of roles.

The tale is told by the three central children who are sometimes reminiscing and sometimes in the thick of re-enacting their story. The fourth wall is frequently breached as asides or comments are confided to the audience - sometimes to move the story along and sometimes for comic effect.

A multitude of characters supplement the main roles and the choreography of using them to such good effect must have taken hours of rehearsal. The use of the revolve was paramount to the success of changing scenes so seamlessly, all set against Mike Bell’s railway station set. Transformed by the addition of relevant individual pieces of furniture, the audience was transported from grand house with servants to the simple cottage of Three Chimneys in Oakworth, Yorkshire, where the children rush down to wave to the 9.45 morning train to London, sending their love to Father as it thundered by.

Each with their individual characters clearly defined, the children relayed events. Amelia Zimmatore was the caring Bobbie, on the cusp of leaving her childhood, Lauren Cudjoe was Phyllis, the youngest and most comedic of the three and Adam Stevens as Peter, whose immaturity was slightly difficult to accept when played by the more adult Adam Stevens. Sally Bosman’s gentility and concern as Mother came shining through and Tony Johnson’s caring Father was redeployed throughout the play in other guises, allowing him to finally return to this main role to be seen, so enigmatically, through the haze of engine steam, for Bobbie to utter her time-honoured words.

Robin Clark’s efficient Mr Perks, the Station Master, delivered both his Yorkshire accent and his tear-jerking final acceptance of his well-meaning birthday gifts with expert timing, with Catherine Elliott as Mrs Perks, happy to take them in the spirit in which they were offered.

Susie Timms was the kindly Mrs Viney, the treasure who helped the family settle in at Three Chimneys and Keith Orton had the plum role as the influential and benevolent old gentleman. Strong in his delivery of his lines in French, David Kay’s Russian author, Szezcpansky, brought believability to his poverty and fear and Phil Wright gave his medical expertise and a sympathetic ear to the family as the local Doctor.

Julia Rogers and Lucinda Banton served as Cook and Tweeny respectively in both wealthy London and, thanks to the old gentleman’s financial assistance, to latterly help out at Three Chimneys. Gerard Kelly’s realistic pain, due to his broken leg, was the ‘hare’ Jim, rescued by the children from the railway tunnel, and the cast provided the hounds. A well-schooled troupe of children alternated their roles as Perks’ children.

A familiar story, delightfully told, the play was masterminded by director Gail Bishop with, I may guess, unending patience to get the result she envisaged.

I sometimes found the juxtaposition of the 1905 setting with some of the more modern use of language - Mummy rather than Mother jarred on my ear, but that was solely in the hands of adapter Mike Kenny.

For Gail Bishop, her talented back-stage crew and her very excellent cast, the play must be considered a Miller Centre Theatre Company triumph.